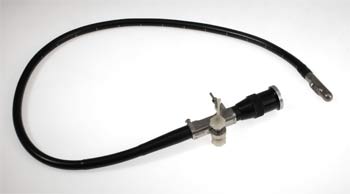 Fiberoptic endoscopy entered the realm of practicality in February 1957 when Basil Hirschowitz passed the first prototype instrument down his own throat and, a few days later, down that of a patient. Hirschowitz began work on the “fiberscope” in 1954 when he was on a fellowship with Marvin Pollard at the University of Michigan. After reading an article by Hopkins and Kapany describing recent advances in fiberoptics, Hirschowitz visited the authors in Britain and discussed the application of fiberoptics to endoscopy. Over the next three years, Hirschowitz and his associates in Ann Arbor, physicist C. Wilbur Peters and his student, Larry Curtiss, devised a makeshift, but effective method of drawing out their own glass fibers. In late 1956 Curtiss succeeded in producing the glass-coated fiber with the optical qualities required for the fiber bundle of a gastroscope. Following the demonstration of the new fiberscope incorporating this advance in 1957, Hirschowitz collaborated with ACMI (American Cystoscope Manufacturing Inc.) to produce a practical instrument. Finally, in October, 1960, Hirschowitz received the first production model, and presented it in Lancet, confidently asserted that “the conventional gastroscope has become obsolete on all counts.”

This instrument diminished patient discomfort by enhancing flexibility and by reducing bulk. Notable endoscope refinements of the late 1960s and early 1970s included re-positioning of lenses for wider field of vision, addition of channels for biopsy forceps, suction, air, or water, and four-way controlled tip deflection.

Fiberoptic technology transformed gastrointestinal endoscopy in ways even more profound than its most ardent advocates might have imagined. Endoscopic procedures become safer and hence more commonplace, and virtually no region of the gastrointestinal tract remained unexplored. William Haubrich, editor of Gastrointestinal Endoscopy, recalled that “improvements in endoscopic design were so numerous and rapid during the early 1970s that one could hardly purchase a new instrument and become acquainted with its use before that instrument was rendered obsolete by a new model.” The expanding diagnostic capabilities of endoscopy were soon complemented by new therapeutic applications, including colon polypectomy with a wire loop snare (1971), cannulation of the pancreatic duct (1972), removal of biliary stone (1975), and placement of feeding tubes by gastrostomy (1979). The range of technical developments in gastrointestinal endoscopy was so extensive across a broad front that John F. Morrissey was prompted to claim that “I think we are approaching a plateau in instrument development.” This conclusion proved premature, but nonetheless conveys the amazement that Morrissey and his fellow gastrintestinal endoscopists felt when surveying the recent instrumental development of their field. Indeed, fiberoptic technology spread rapidly from gastroscopy to colonoscopy, bronchoscopy, and other endoscopic domains.