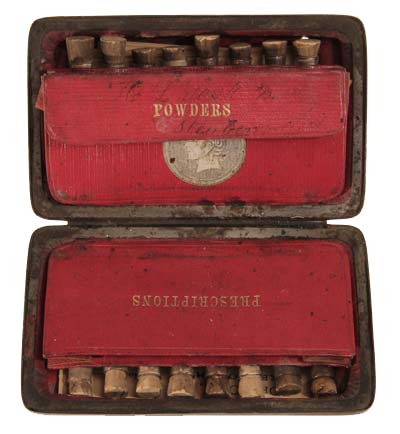 This homeopathic medicine pocket case belonged to Henry Sook ( – 1893), a graduate of the Western College of Homeopathic Medicine (1863) who practiced in Steubenville, on the Ohio River, until 1869. Dr. Sook’s case contained 16 small vials of homeopathic pills and powders. One red leather interior flap is decorated with a bust of Hahnemann, taken from the seal of the American Institute of Homeopathy (est.1844). The other flap is inscribed “H. L. Sook, Steubenville, O.” Later in life (1879-93) Sook practiced in Lakewood, Ohio, and became a prominent citizen of that community.

Homeopathy is a system or “school” of medicine founded by German physician Samuel Christian Frederick Hahnemann. Hahnemann centered his approach to healing around the principle of “like cures like”: that which causes a disease can also cure it. In addition, he advocated more precise dosing and favored miniscule amounts of medicine. In America, homeopathy introduced elements of conservatism to dominant medical theories, but at the same time engendered bitter sectarian conflict within the ranks of medicine. Indeed, the American Medical Association itself originated from anti-homeopathic sentiments.

Homeopathic physicians started to trickle into Ohio in the early 1840s, practicing in smaller cities because of their poor reception among “regular” (allopathic) physicians in larger cities. By the 1890s, fully twenty percent of physicians in Cleveland called themselves homeopaths. Among the more well-known local homeopaths were Seth R. Beckwith, with a large Cleveland practice as physician and surgeon to railroads; Benjamin L. Hill, one of the founders of the Western Homeopathic College of Cleveland; and Hamilton Fisk Biggar, nationally known medical advisor and intimate friend of John D. Rockefeller. B. H. Bartlett opened the first homeopathic pharmacy in Cleveland in 1846, at the corner of Superior Ave. and Public Square.

Homeopathy depended upon teaching institutions and hospitals for its survival. In 1850 the Western Homeopathic College of Cleveland, the second such institution in the country, came into being, and in 1856, Seth Beckwith opened the Cleveland Homeopathic Hospital, the first privately owned hospital in Cleveland. These two institutions soon affiliated, and college faculty practiced and taught at the hospital.

Further consolidation of homeopathic resources occurred after 1869, as the rivalry with allopathic physicians grew worse. Within a decade, Cleveland homeopaths built the Huron Road Hospital as a place of their own. It survives today, but without homeopathic affiliation, as Meridia Huron Hospital in East Cleveland. Homeopathic education in Cleveland ended with the closing in 1922 of the Cleveland Pulte College of Homeopathy (by then affiliated with Ohio State University). This soon spelled the end of homeopathy in Ohio.