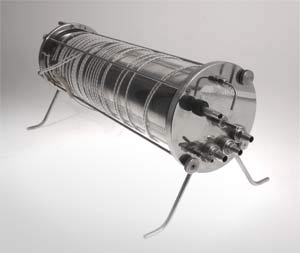 The Kay-Cross oxygenator is a film type rotating-disc perfusion device. It takes the place of both the heart and lungs during surgery. The device removes carbon dioxide waste gases from the blood and infuses it with oxygen before circulating it back through the body. This machine, designed by Earle B. Kay and Frederick S. Cross, made blood perfusions both safer and quicker.

The 1950s and 60s were a time of much innovation in the field of artificial respiration. Willem Kolff, inventor of the Travenol twin-coil artificial kidney, worked with his team at the Cleveland Clinic on a membrane oxygenator. The membrane oxygenator works in much the same way as the artificial kidney. Blood flows through a cellophane tube which is wound around a coil of plexi-glas. The whole apparatus is dipped in a dialyzing solution. The waste particles (as well as carbon dioxide) diffuse from the blood to the solution. In Minneapolis in the early 1950s, DeWall was working on bubble oxygenators. A bubble oxygenator drains blood from the body and into a reservoir where it is introduced to bubbles of oxygen.

In 1956 Cleveland was the open heart surgery capital of the world. Four teams at four hospitals were performing this new precarious type of surgery. Kay and Cross used their oxygenator at St. Vincent’s Charity hospital, Effler and Groves used the Kolff membrane oxygenator at the Cleveland Clinic, and teams were also in place at Metropolitan General Hospital, and University Hospitals.

The rotating disc oxygenator like the one built by Kay and Cross dipped discs into venous blood and rotated them at speeds up to 120 RPM. This created a thin film of blood on the discs which were housed in a glass or metal encased atmosphere of oxygen.