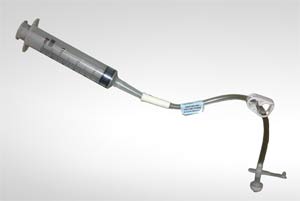 When patients have difficulty swallowing, as a result of disease or injury, a feeding tube can be inserted to provide the nutrients to sustain life. In 1979, Micheal Gauderer, a pediatrician from University Hospitals of Cleveland, and Jeffrey Ponsky, a University Hospitals endoscopist, devised Percutaneous Endoscopic Gastronomy (PEG) to insert these feeding tubes that was both inexpensive and low risk. This procedure comprised an attractive alternative to laparotomy, a surgical incision of the abdomen, and soon became a widespread indication for therapeutic endoscopy.

The placement of a PEG tube involves but a few ingenious steps. First, a cannula containing a suture is inserted through the skin into the abdomen of the patient. An endoscope is inserted down the esophagus to the stomach and the endoscopist snares the suture from the cannula. The suture is then pulled up through the esophagus and out of the mouth where it is tied to the enteral feeding tube. The tube is then pulled back down through the hole in the stomach wall and skin until it is partly out of the body. The mushroom tip on the internal end of the tube keeps it in the stomach. After the tube is inserted, nutrients may be fed directly into the stomach via syringe after twenty-four hours.

PEG could be performed either as an inpatient or outpatient surgery. The procedure eliminated risks associated with laparotomy, including anesthesia complications, infection, and organ rupture. In their review of 150 cases published in the Archives of Surgery ( August,1983), Gauderer and Ponsky found no deaths as a result of the procedure, and complications (in only ten percent of cases) were minor and easily treated.

The apparatus seen here is the PEG feeding tube and a syringe that would be used to administer the nutrients.

Gauderer, currently the director of surgery at the Greenville Children’s Hospital in South Carolina, originally designed this technique for use on children, believing laparotomy to be too risky. Ponsky, now the chairman of the Department of Surgery at Case Western Reserve University, adapted the technique for use on adults. According to a March 26, 2005 Associated Press article, neither physician meant for the tube to be a method of “end-of-life care.”