Phrenology appeared on the American scene in 1832 when Johann Kaspar Spurzheim (1776-1832) arrived in New York to begin a speaking tour. His popular lectures presented the teachings of Viennese physician Franz-Joseph Gall (1758-1828), who proposed the concept of localized brain function. According to Gall, the different functions of the brain, such as memory, language, emotion, the ability to recognize faces, perform calculations, and appreciate music, were situated in specific sites or “organs” of the brain. Gall contended that each “organ” of the brain would hypertrophy (grow) or atrophy (shrink) with use, and that these changes would be perceptible on the surface contour of the skull. Consequently, one could assess different abilities and personality traits by “reading” the surface bumps on the skull. Gall never approved of the term phrenology; he called his system organology and later simply the physiology of the brain. Spurzheim, however, used the term phrenology and it stuck.

The phrenology head seen here provided a three-dimensional reference guide to direct the reading of a subject’s skull. It was marketed by L. N. Fowler & Co., the phrenological enterprise of the American brothers Lorenzo Niles Fowler (1811-1896) and Orson S. Fowler (1809-1887). The Fowlers first took to the road in 1834, lecturing for free and examining heads for a fee. In the next year they opened an office in New York City, where they operated a phrenological museum and library, the publishing house of L.N Fowler & Co., and a lecture booking bureau. Their American Phrenological Journal and Life Illustrated, which lasted until 1911, soon emerged as the leading phrenological publication.

Inscription on rear of porcelain bust: “For thirty years I have studied the Crania and living heads from all parts of the world, and have found in every instance that there is a perfect correspondence between the conformation of the healthy skull of an individual and his known characteristics. To make my observations available I have prepared a Bust of superior form and marked the divisions of the Organs in accordance with my researches and varied experience. L. N. Fowler.” 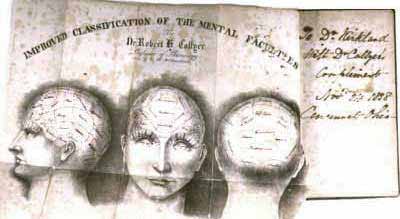 It is found in Robert H.Collyer’s Manual of phrenology, or the physiology of the human brain (Cincinnati, 1838). Collyer, an itinerant phrenologist in the late1830s, lectured in Cincinnati, where Kirtland was a professor at the Medical College of Ohio. Kirtland evidently attended a lecture by Collyer, followed by a private consultation. The results of this “reading” of Kirtland’s skull are found in a “Phrenologic analysis, showing a delineation of character,” pasted in the back of Collyer’s Manual of phrenology. In general, Kirtland felt that the reading gave accurate results, as indicated by his pencil notations throughout the book. For instance, Kirtland scored high on his ability to remember events (16+: “I recollect events that occurred at four years of age — every battle that Bonaparte fought after his Italian campaign”), but his retention of proper names was poor (6: “Remember the person but soon forget the name”). Of greater importance, Collyer rated Kirtland extremely high in his “love of approbation,” in his sense of “caution,” or carefulness, and in his degree of “conscientousness.” How seriously Kirtland took all this is anyone’s guess.