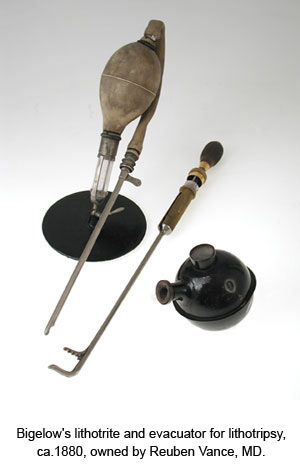 When the French surgeon Jean Civiale performed lithotripsy on a human subject in 1823, he initiated the field we now call “minimally invasive surgery.” To remove a stone or calculus in the bladder, Civiale inserted an instrument through the urethra and into the bladder. He then bored holes in the stone and crushed it with his instruments.

Although lithotripsy evolved in Europe first, it soon crossed the Atlantic. One American doctor enthused that “any expedient calculated to supersede so dreadful an operation as lithotomy [a surgical opening of the bladder], should be embraced with eagerness,” while another proclaimed that “since the discovery of vaccination nothing so interesting to humanity has been made known.” The first successful lithotripsy in America took place in New York City, performed by L. Depeyre in October 1830. The procedure was firmly established by 1840, but remained confined to a small number of surgeons willing to devote themselves to mastering the challenging technique.

In Cleveland, Ruben A. Vance (1845-1894) emerged as an outspoken proponent of lithotripsy. Born and raised in Gallipolis, Ohio, Vance studied medicine at the University of Michigan and Bellevue Hospital Medical College. He began his career in New York City, interrupted by two years studying medicine abroad, but left when life in that city took a toll upon his health. Vance returned to Ohio, settling first in Gallipolis, then Cincinnati, and finally Cleveland.

In 1881, he accepted the chair of surgery at the Medical Department of the University of Wooster (a forerunner of Case Western Reserve University School of Medicine). Vance brought to Cleveland an exemplary training in surgery, as well as familiarity with the most up to date instrumentation. He was consulting surgeon to St. Alexis Hospital (est.1884), and was chief of staff there until his death in 1894.

As a surgeon Vance performed a wide array of procedures, which was customary before the extreme specialization of our own time. One operation especially intrigued Vance: lithotripsy. There was considerable controversy surrounding this technique, however. Advocates contended 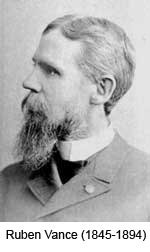 that it posed less serious risks than the open wound of lithotomy, while detractors argued that many patients were not suited for lithotripsy and would likely experience adverse complications. During the last fifteen years of his life, Reuben Vance remained a steadfast champion of lithotripsy in Cleveland. He asserted that the procedure was likely to have a favorable outcome if the patient was in a good state of health and received adequate anesthesia (morphine).

In the early 1880s acceptance of the procedure was stimulated by the advent of litholapaxy, which combined lithotripsy and bladder irrigation, so that bladder stones could be crushed and flushed in just one session. (Modern lithotripsy entails the use of sound waves to shatter stones.) Following Reuben Vance’s death from typhoid fever in 1894, his lithotripsy instruments were acquired by Samuel W. Kelley, who donated them to the Dittrick Museum.