In 1926, T. Wingate Todd (1885-1938), professor of anatomy at the School of Medicine of Western Reserve University, donated this head spanner to the Dittrick Museum. In a letter accompanying his gift, Todd explained the significance of the instrument to Curator Howard Dittrick:

I have ready the first instrument made in this [anatomical] laboratory. It is a head spanner for measuring the height of the head above the ear holes. I made the initial design which was worked out and perfected by our machinist Mr. Joseph Cherney. It represents the first of a long line of instruments of precision made for anatomical and anthropological purposes and now supplied to many institutions in this country, in Canada and in Great Britain. 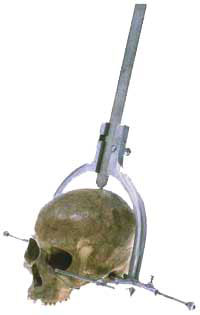 With Todd’s instrument, cranial measurements could be taken simply and accurately. The prime reference for all cranial measurement is the Frankfort line, a horizontal plane from the orbit, or eye socket, to the ear holes. (Physical anthropologists agreed upon this standard at a meeting held at Frankfort, Germany, in the nineteenth century).

To establish the Frankfort line with Todd’s head spanner, one placed the horseshoe-shaped frame over the skull and positioned the two opposing pins in the earholes. Then the folding tab on one side of the frame was placed at the base of the left orbit, bringing the instrument into alignment. The vertical ruler could then be used to measure the cranium.

Todd, who had been educated in England, came to Cleveland in 1912 to fill the anatomy chair vacated by Carl A. Hamann, who became Dean of the School of Medicine. When Todd donated this instrument to the Dittrick Museum, he was busy building the Hamann-Todd Osteological Collection. Originally located at the School of Medicine of Western Reserve, the collection now resides at the Cleveland Museum of Natural History and comprises 3,100 modern human and more than 900 non-human primate skulls and skeletons. It is considered the world’s largest collection of anthropoid and documented human skeletons.

Todd’s most important published work, The Atlas of Skeletal Maturation (1937), enabled doctors to determine the health and maturation of children by examining the bones of their hands. Todd also initiated the Brush Inquiry in 1926 to chart the physical and mental progression of the normal, healthy child (as distinct from unhealthy children, whose remains tended to predominate in the Hamann-Todd collection). This was later (1970) consolidated with the Bolton Study, begun in 1929 by B. Holly Broadbent, SrThe Bolton Study concentrated on growth and development of the face and teeth, as documented by annual radiographs and supplemental notes regarding nutritional, dental and medical health status and disease history. Today, the Brush Inquiry and the Bolton Study collections combine to form the Bolton-Brush Growth Study, comprising the world’s most extensive source of longitudinal human growth data.