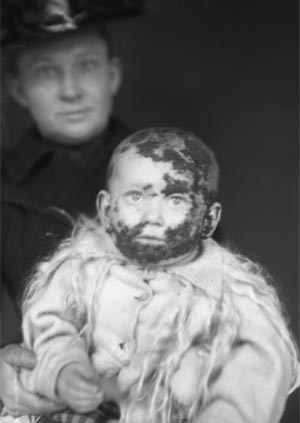 Corlett donated his correspondence, publications, medical text books, dermatological photographs, glass lantern slides, and negatives to the Cleveland Medical Library Association in 1936. The collections, now housed in the Dittrick Medical Center and Museum comprise approximately 360 black and white photographs in Corlett’s collection, 55 are hand colored. The photographs date from 1884 to 1920. In addition there are approximately 320 glass plate negatives, either 4 × 5, 5 × 7, 5 × 8, or 8 × 10 inch formats. For demonstration purposes, Corlett also created a collection of over 400 glass lantern slides, 30 of which are hand colored.

The earliest photograph in Corlett’s collection is dated 1884.1 The photograph was reproduced as a lithographic plate to accompany Corlett’s article entitled “An Unusual case of Psoriasis” published in the Journal of Cutaneous and Venereal Diseases in July 1884. The original 8 × 10 inch glass plate negative and the contact print survive. On the border of the plate the following has been etched into the photographic emulsion “subject for Dr Corlett 8 + 10, 3.19.84.” From this annotation one may infer that the photographic plate and the print were the work of a professional photographer. 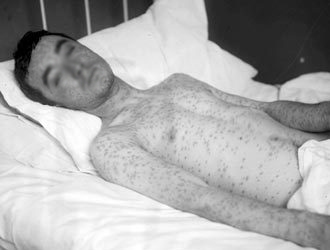 Perhaps inspired by the introduction of lightweight portable plate cameras c.1901, Corlett had become a proficient photographer. In the Preface his textbook entitled A Treatize on the Acute, Infectious Exanthemata including Variola, Rubeola, Scarlatina, Rubella, Varicella, and Vaccinia, with Especial Reference to Diagnosis and Treatment (1901) he records that 42 illustrations (with the exception of 7 plates) were “reproduced from photographic negatives taken by the author.” 2 Corlett photographed some patients in his “White Office” at his home on the corner of Euclid Avenue and 20th Street. A handful of patients were photographed within their homes, as one can see elaborate wallpaper, furnishings, paintings, and so on. The majority of patients however, were photographed in the hospital wards, lying on beds, etc. or in an empty lecture theatre. Handwritten annotations on the prints suggest this patient was photographed over a period of 8 days.The annotations for photo above right read: No. 3, fourth day, 3.00 pm. Lesions becoming watery. Eyes bloodshot. Feels faint on sitting up. Temperature 101° Secondary fever begins.

Continue to next page of exhibit