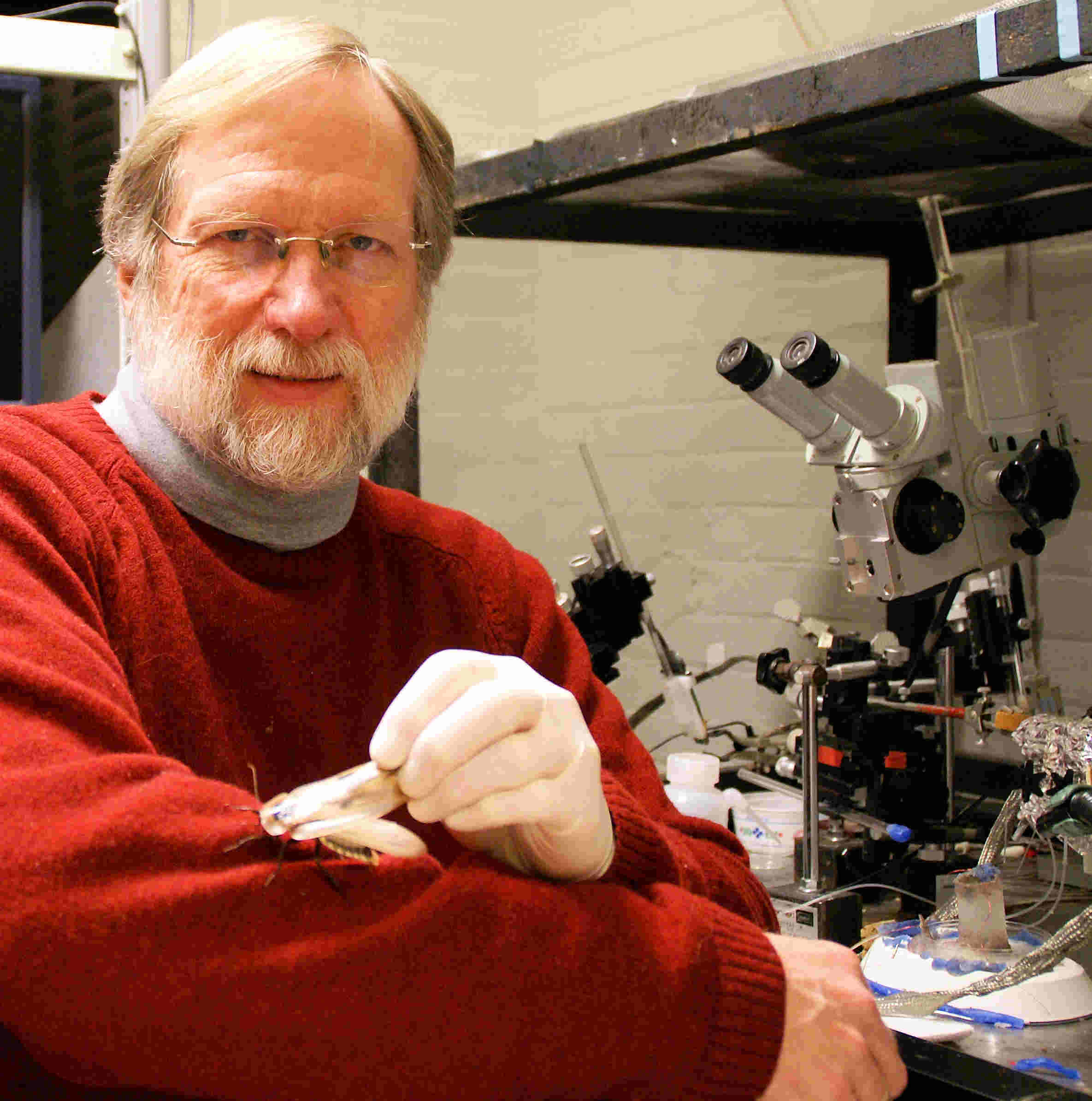 Dr. Ritzmann’s research is aimed at determining how animals move through the kinds of complex terrain found in natural settings. That is, how does an animal trying to get from point A to point B passed a range of barriers alter movements to climb over, tunnel under, or go around those objects? We have focused upon insect systems and in particular the cockroach, because they are very agile animals, yet they provide several technical advantages for the kinds of questions that we ask. We use a combination of techniques. First of all, we record body and leg movements of freely moving or tethered insects with high-speed video systems that record at 250 – 1000 frames per second. We can also correlate those movements with electrical activity recorded from nerves or muscles or from individual neurons. More recently we have begun to examine a region of the brain called the central complex that has been implemented in supervising the kinds of movements we are interested. We use both extracellular and intracellular methods to monitor electrical activity in the central complex. Extracellular, multi-channel recordings allow us to record from 20-30 neurons in the central complex for several hours, allowing us to test their activity in response to a wide range of experiments. Intracellular recording monitors a single neuron for a shorter period of time, but with dye injection we can identify exactly which neuron was recorded. We have also recorded from this region in tethered walking cockroaches and found some neurons that alter their activity as step frequency changes and is some cases predicts those changes. Finally, we can manipulate the central complex either with electrolytic lesion or injection of toxins or anesthetics then examine how brain activity changes and how these procedures affect behavior.

While our studies are aimed at understanding locomotion in complex terrain, the data are also provided to members of Dr. Roger Quinn’s Biorobotics laboratory. There it is used in efforts to design and build hexapod robots. Currently the Biorobotics group at CWRU is developing two lines of robotic devices. One is a large vehicle modeled closely after the joints of the cockroach that are essential for agile walking and climbing. The other is a much simpler device that uses biologically inspired principles derived from our insect studies, but implements them in abstract form on a simpler mechanical platform. We also developed a robotic leg that was modeled after the front leg of the same species of cockroach. It is controlled by a computer model that is inspired by insect leg reflexes. Movies of many of these and other robots can be viewed at the Biorobotics web site.

Feel free to download any of these videos for teaching or other purposes. Just, please, cite the source.