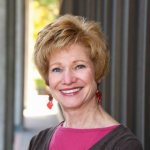 After more than 25 years, Cynthia Stilwell has retired from her position as executive aide to the dean of the College of Arts and Sciences. Stilwell was a steady force for seven interim and permanent deans, beginning with John Bassett in 1995 and concluding with Interim Dean Sandra Russ. Stilwell passed the proverbial baton to Robert Utrup, executive aide to the college’s new dean, Joy K. Ward.

“Cynthia is the glue that held the college together,” said Bassett. “She saved me from making more mistakes during my time as dean than maybe anyone else. I don’t know of any appointment we’ve made that has had a longer or more positive impact on the College of Arts and Sciences and university than hers.”

Others echoed Bassett’s sentiments and praised Stilwell’s ability to establish structure and lend a calm, can-do presence to her role in the dean’s office.

“I ran out of ways to express my gratitude, so I developed just a little phrase,” said Turner. He would tell her, “Perfect. Done. Thanks.”

As for Stilwell, she shared a few of her own memories and praised her co-workers.  “Is this not the best office in the world to work in? The high integrity, work ethic and vast understanding of the meaning of serving others—it’s been an honor, a privilege, a distinct pleasure to work for each of you,” she said. “Over the years I have said many times to many people, ‘I can’t wait to get to work each day,’ and I really meant it.”

Stilwell has no firm plans for retirement. “My husband—i.e., my best friend—and I will work together to navigate the global pandemic until we hear the ‘all clear’ horn. Then we will figure out what retirement looks like for us,” she said.