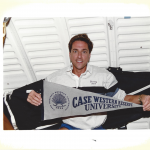 Former NASA astronaut Donald Thomas (CIT ’77, physics) will be the keynote speaker at Engineers Week 2020, an annual event that brings together students, faculty, alumni and the public to celebrate achievements in engineering and science.

Thomas will share his experiences of living and working in space along with some of his favorite views of Planet Earth taken from above during this opening night reception, Monday, Feb. 17, 5-7:30 p.m., in the Thwing Center Ballroom. (Register here.) link to https://casealumni.org/e-week/e-week-registration/

A native Clevelander, Thomas graduated from Cleveland Heights High School in 1973. After graduating with honors from CWRU, he earned a master of science degree and a doctorate in materials science from Cornell University.

In 1988, Thomas joined NASA’s Lyndon B. Johnson Space Center as a materials engineer. His work involved lifetime projections of advanced composite materials for use on Space Station Freedom. He was also a principal investigator for the Microgravity Disturbances Experiment, a middeck crystal growth experiment which flew on STS-32 in January 1990. This experiment investigated the effects of Orbiter and crew-induced disturbances on the growth of crystals in space.

Selected by NASA in January 1990, Thomas became an astronaut in July 1991. A veteran of four space flights, he logged over 1,040 hours in space. His first assignment, STS-65 Columbia (July 8-23, 1994) set a new flight duration record for the space shuttle program. During the 15-day mission, which carried the second International Microgravity Laboratory (IML-2), the crew conducted more than 80 experiments focusing on materials and life sciences research in microgravity. The mission was accomplished in 236 orbits of the Earth, traveling 6.1 million miles in 353 hours and 55 minutes.

In his last assignment before retiring in July 2007, Thomas served as the International Space Station (ISS) program scientist. overseeing NASA experiments performed on the station.

Learn more about the full roster of events happening during Engineers Week 2020.

Don also will deliver a keynote address, “How Kennedy’s Moonshot Opened the Door on My Trips to Space,” at the JFK Moonshot Symposium on Tuesday, Feb. 18 at 2:15 p.m. at the Tinkham Veale Ballroom. The event will commemorate the legacy of John F. Kennedy and the Apollo program.