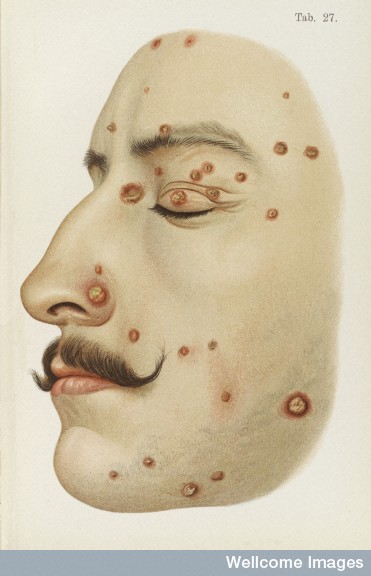 On January 21st, 1677, the first medical publication in America was circulating around Boston. Its message? How to manage smallpox.

The pamphlet was a broadside, 12 inches by 17 inches, and written by Reverend Thomas Thacher. John Foster of Boston printed and sold it under the title: “A Brief Rule to guide the Common People of New England How to order themselves and theirs in the Small Pocks, or Measles.” A second version appeared in 1702. [1] Pamphlets on smallpox continued to circulate (almost as much as the disease) well into the next century–but outbreaks continued even into the early 20th century.

Smallpox is an infection caused by the virus called variola, a member of the poxvirus family. It is strictly an infection of human beings, and is a relatively contagious disease. Most infections were caused by contact with someone who had already developed the characteristic skin lesions (pox) of the disease, from contaminated air droplets, and even from objects used by another smallpox victim (books, blankets, utensils). The respiratory tract was the usual entry point for the variola virus into a human being. [2]

Here in Cleveland, a major outbreak of smallpox occurred as late as 1902. Only a program of community-wide 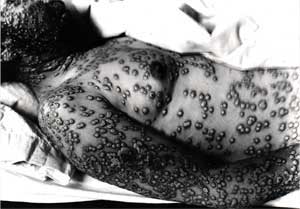 vaccination stopped the spread–through the cooperation of Cleveland’s elected officials, public health officers, the medical community, civic-minded businessmen, religious leaders, and educators. Thanks to their efforts, this would be the last smallpox epidemic in the city of Cleveland. Want to know more? Visit CITY ON THE EDGE OF DISASTER.

Medical publications remain one of the effective ways of alerting professionals about breakthroughs in identification and management of disease–interesting to think that the very first in the US served exactly this purpose!

[2] City on the Edge of Disaster, Dittrick Museum