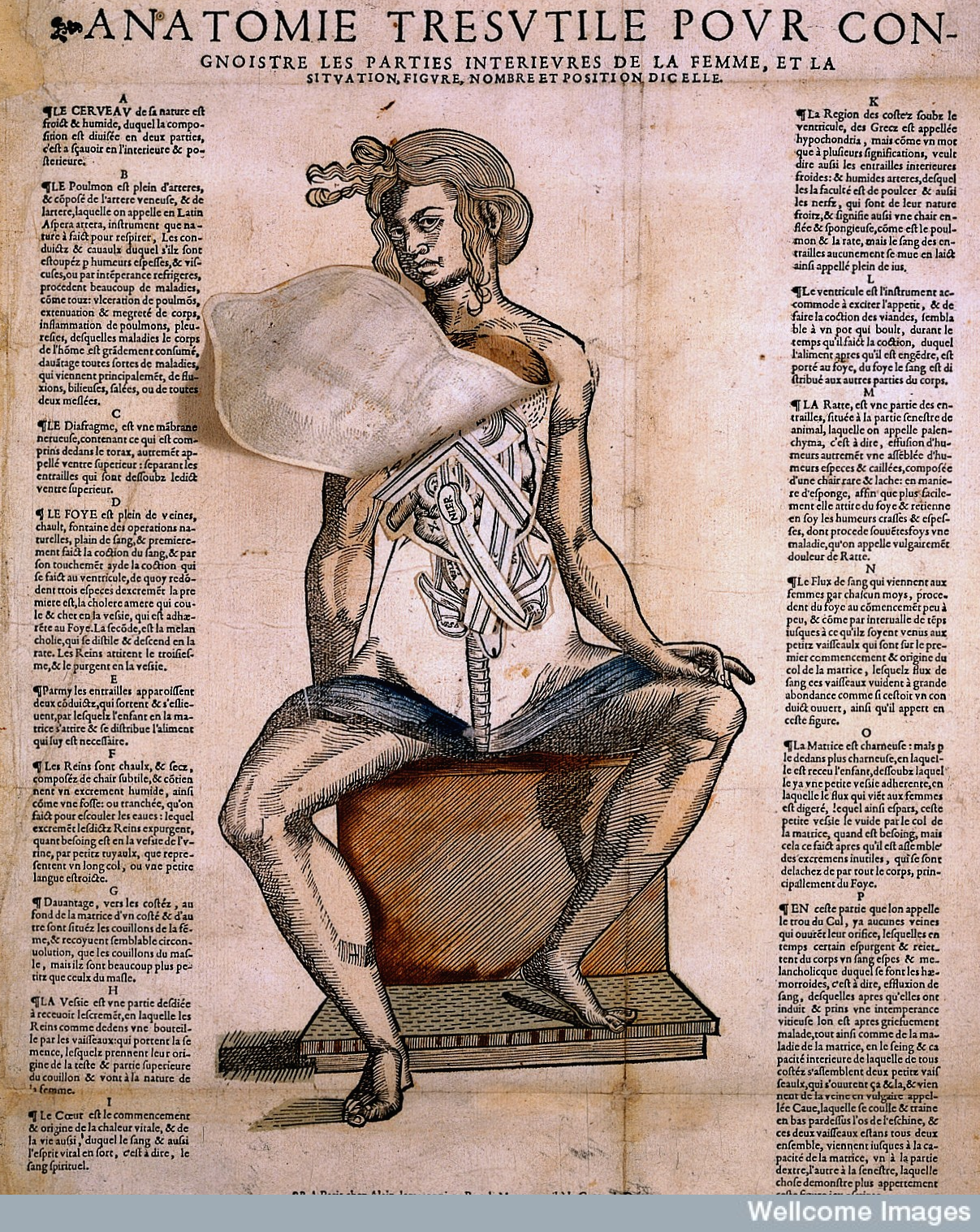 Bodies move and have layers. Yes, this is hopefully an obvious statement. But imagine you lived in the 16th century and were attempting to demonstrate this point. In print.

When illustrations served as a primary means of study for students of anatomy and medicine, could a piece of paper adequately represent the complexity of the human body?

How about multiple pieces of paper?

Anatomical “fugitive” sheets, so named because of their unfortunate tendency of being torn or misplaced over time, allowed readers to visualize the layers of organs lying beneath an illustrated subject’s flesh [1]. Any observer could see the interior of the body through stages of dissection without the limitations set by a decaying corpse.

The earliest uses of moveable, superimposed flaps are from 1538 by Heinrich Vogtherr in Strasbourg, Germany [2]. Vogtherr created multiple delicate layers of pressed linen to show the positions of organs in both male and female subjects. Although few examples remain, conservators at the Harvard University Library are working to preserve these rare anatomical texts.

In his 1543 de Human corporis fabrica libri septum, Vesalius also provided readers the option of creating their own anatomical flaps by including instructions as to how to cut out and attach additional illustrations onto other plates. Although the idea of cutting and pasting into a first edition Vesalius text might strike terror into the hearts of medical historians today, it seems such alterations were the author’s original intention [3].

The use of such flaps extends throughout the 19th century, including G. Spratt’s 1848 edition of Obstetric Tables: Comprising Graphic Illustrations with Descriptions and Practical Remarks; Exhibiting on Dissected Plates Many Important Subjects in Midwifery [4]. Despite the verbosity of the title, this work teaches through illustration rather than words. Included among the “dissected plates,” is a blushing female with downturned eyes, lifting her skirt to expose her naked body to the reader. As one thumbs through the fugitive pages, the woman’s belly swells, her breasts change in shape, and the outlined womb also tilts and grows. When one reaches the final flap, a child, in utero, is exposed. Thus, Spratt is able to demonstrate with anatomical fugitive sheets not only the anatomy of a body, but the way it changes over time.

Newer technologies from plastic transparent sheets to computer animation have made anatomical fugitive pages a thing of the past. However, these simple paper flaps remain an example of the early ingenuity and workmanship that used humble materials to explain the wonders of anatomy.