“Of all the results that exposure of the skin to the sun or air produces, the most disagreeable is that known by the name of tan, or freckles. The finest and fairest skin is most liable to this affection, and such is the consolation usually offered to females who suffer — the state is nevertheless a disease when numerous.” 1
–Dr. William Kittoe, 1845 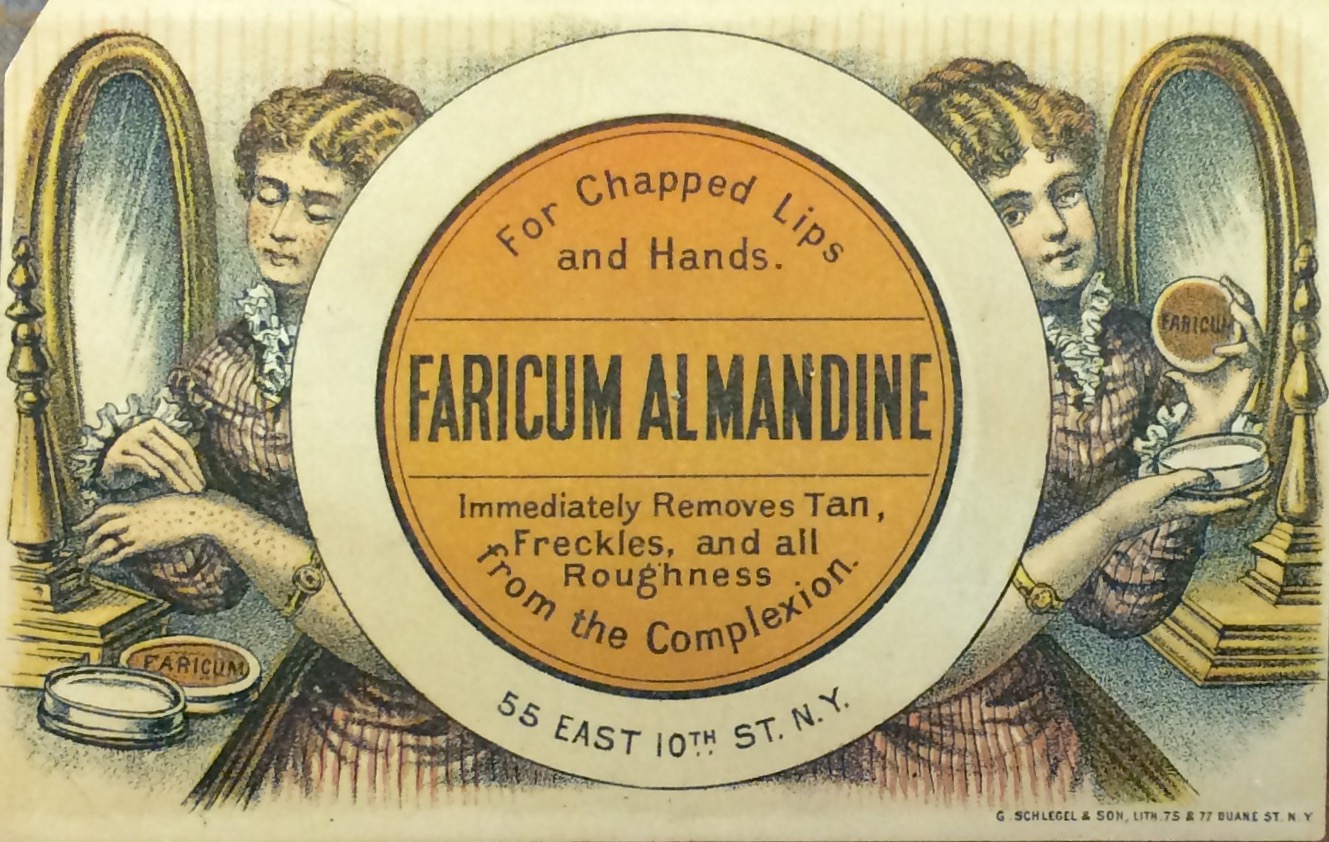 In 19th century summers, most Americans considered tans more pathological than fashionable. Patent medicines like Faricum Almandine above (Fig. 1) and compounds from doctors and pharmacists provided men and (primarily) women the means to eliminate any evidence they had been in the sun. Undoubtedly this specific desire to maintain “clear, white skin” reflected xenophobic and classist biases against non-white and outdoor-laboring citizens (Fig. 2). But to fully appreciate why products to control skin conditions like tans, freckles, and sunspots became so popular, let’s look at the underlying humoral theory of medicine that informed these concerns. 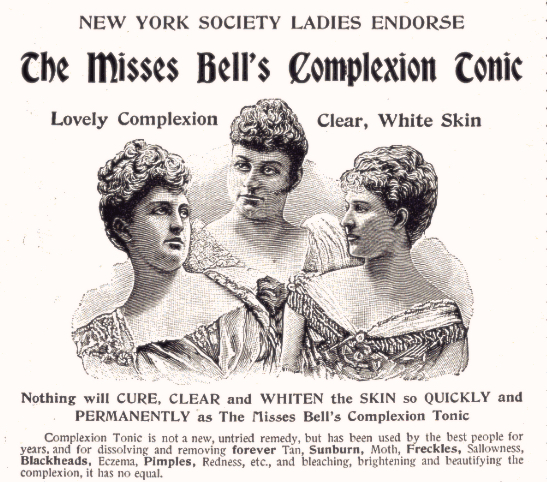 Although major shifts in medical practice and teaching happened between the time of Hippocrates and the 19th century, the concepts of balance and environmental effects on the body’s humors still prevailed as cultural ideas. The basics of humoral theory are that the four bodily humors (blood, yellow bile, black bile, and phlegm) must remain in balance to maintain health. The humors’ levels vary seasonally — for example yellow bile from the liver is produced more during the hot summers. So how did physicians fit new chemical analysis methods into a humoral theory framework to explain changes in skin coloration?

It gets a bit tricky now, but here’s the theory: skin is made up of molecules like oxygen, carbon, and hydrogen. When heated by the sun, the oxygen molecules become “excited” and detach from the molecules nearby. However, if the oxygen encounters a compound, like iron, for which they have greater affinity, they will bind with it and form a brownish substance, possibly an all over tan, or a sporadic freckle.2

While iron is usually found in the skin, that amount is much greater in the summer. When the liver seasonally produces excess yellow bile, the blood becomes loaded with this “brown matter” that is deposited in the skin, awaiting the suns rays.3 Calling freckle-like spots today  “Liver Spots” is thus a vestige of humoral theory. 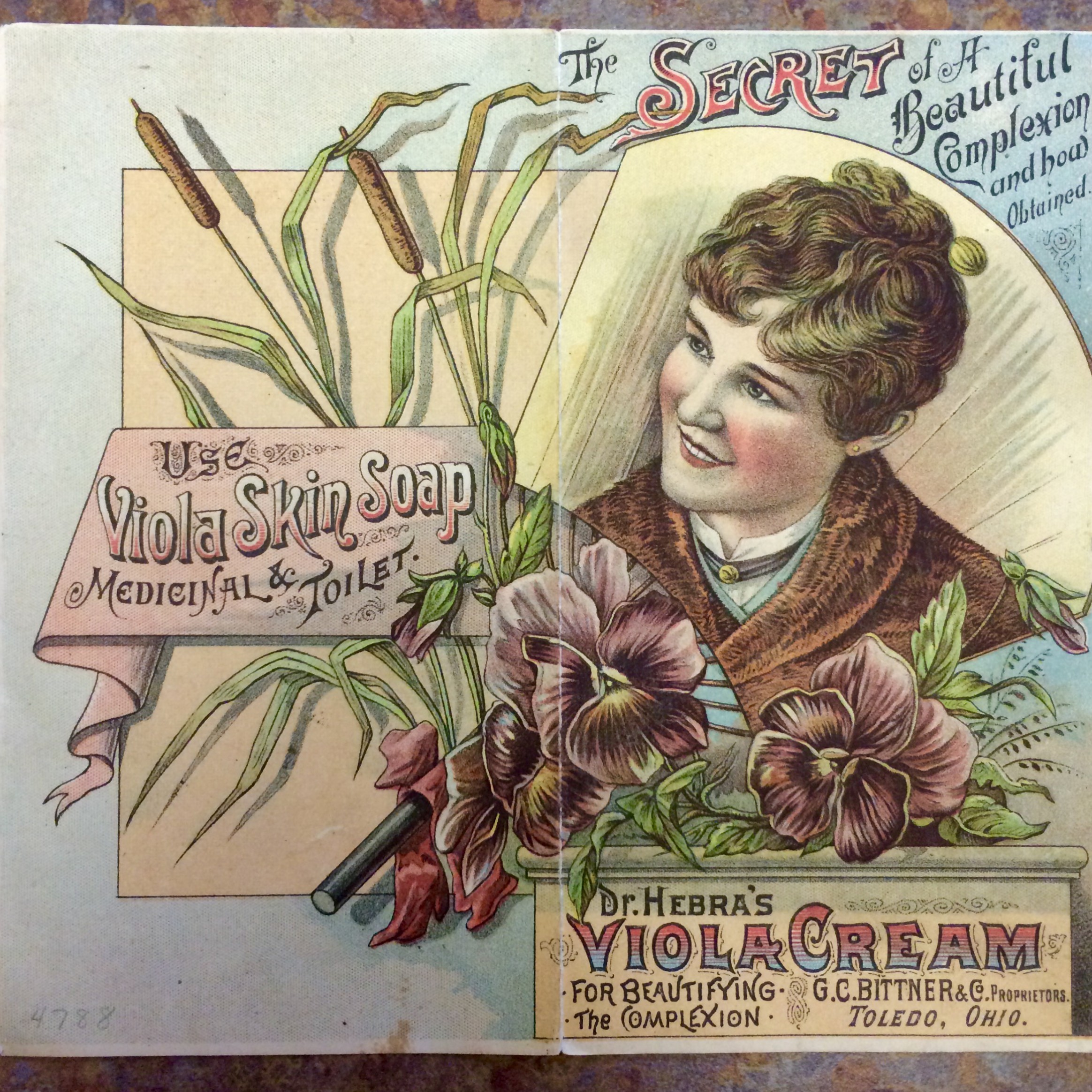 Young ladies with a propensity to sunburn and freckle could submit to purgatives or bloodletting to rebalance their humors in hopes preventing these conditions, but many formulae and products advertised “quick fixes” to remove them immediately.5 For example, Dr. Hebra’s Viola Cream (Figures 3, 4 and 5) claimed to be “the greatest discovery of the present century, for beautifying the complexion” that could remove “freckles, liver-moles, moth-patches, blackheads, tan, sunburn, and pimples.” Druggists’ journals also included formulas for lotions and pomades that would lighten sun-exposed skin, like this one from The Pharmaceutical Journal and Transactions6:

Other recipes for “freckle eradicators” included harmful ingredients like corrosive chloride of mercury that causes skin to rash and peel away, revealing lighter skin beneath.7 Druggists warned that frequent usage of these medicines would result in permanent skin damage. Although Dr. Hebra’s packaging promised users “skin beautifully soft and pure” when applied every night before bed until all blemishes disappear, later testing of these products revealed they too contained (2.8% of the total composition) this poisonous substance! 8

Fig. 5 The back of a Dr. Hebra’s Viola Cream trade card from the Dittrick Collections.

“Liver spots”, tans, and freckles provided evidence that seasonal imbalances in the body’s humors could physically mark men and women who dared enter into the elements. The plethora of products making outrageous scientific claims speaks not only to the fashionableness of fair, unblemished skin in the 19th century, but also the conviction that such a complexion was not easy to maintain in the summer heat.

About the Author:
Catherine Osborn, MA is a Research Assistant at the Dittrick Museum of Medical History and the Editorial Associate of Culture, Medicine, and Psychiatry. She enjoys pursuing historical tangents and proving she can find any source online.

References:
[1] Kittoe, William. 1845. The Ladies’ Medical Friend: Or a Guide to the Treatment of Those Diseases Incident to Females from an Early Period ; with Advice to Mothers, on the Management of Infants, to which is Added, and Appendix of Original Prescriptions. 2nd. Ed. Sherwood, Gilbert, and Piper: London, UK.

[2] Bennett, John Hughes. 1860. Clinical Lectures of the Principles and Practice of Medicine. Samuel and William Wood: New York, NY. [3] Good, John Mason, Samuel Cooper, and Augustus Sidney Doane. 1835. The Study of Medicine, Improved from the Author’s Manuscripts and by Reference to the Latest Advances in Physiology, Pathology, and Practice. 6th American Ed. Harper & Bros.: New York, NY. [4] The Misses Bell’s Complexion Tonic. April 1898. Godey’s Magazine Vol. 136. [5] Horner, William Edmonds. 1835. The Home Book of Health and Medicine: A Popular Treatise on the means of avoiding and curing diseases, and of preserving the health and vigour of the body to the latest period; including an account of the nature and properties of remedies, the treatment of the diseases of women and children, and the management of pregnancy and parturition. Key & Biddle: Philadelphia, PA. [6] “Pomade for Freckles” in “Notes and Queries.” 1873. The Pharmaceutical Journal and Transaction 3(2): 618. [7] Beggy, Joseph A. 1889. Practical Hand-Book of Toilet Preparations and their Uses, also Recipes for the Household. William L. Allison: New York, NY. [8] Michigan Pharmaceutical Association. 1887. Nostrums. Proceedings of the Michigan Pharmaceutical Association Fifth Annual Meeting. p. 27.
Previous
Next