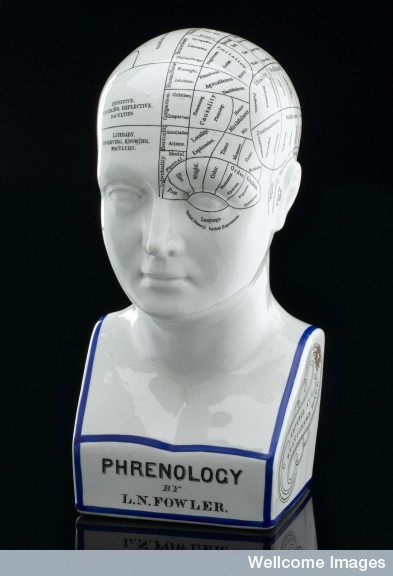 Diagnosing by the Bump

Franz-Joseph Gall (1758-1828), proposed that different functions, such as memory, language, emotion, and ability, were situated in specific “organs” of the brain. These portions of the brain would grow or shrink with use, and the changes would appear as bumps or depressions on the skull. Called Phrenology, the practice of “reading” the bumps supposedly allowed a practitioner to assess different abilities and personality traits. It’s a curious idea: what might our own phrenological assessment look like?

Phrenology and the American Dream

Sometimes, we see what we want to see… Americans were very receptive to phrenology when it arrived stateside in 1832. Johann Kaspar Spurzheim (1776-1832) begin a speaking tour, and found a very willing audience. Why? Partly because it fit the “American Dream,” emphasizing the ability to train the mind and rise in society. In other words, despite the bumps you were born with, we could all get better, a kind of rags-to-riches idea very popular even today.

Having Your Head Examined

What does it take to be a phrenology expert? American brothers Lorenzo Niles Fowler (1811-1896) and Orson S. Fowler (1809-1887) made and marketed phrenology busts with the important “organs” of the brain mapped out. The Fowlers took the heads on the road in 1834, lecturing for free and examining heads for a fee. They even provided their “patients” with a 175 page manual for improving the brain!

“For thirty years I have studied the Crania and living heads from all parts of the world, and have found in every instance that there is a perfect correspondence between the conformation of the healthy skull of an individual and his known characteristics. To make my observations available I have prepared a Bust of superior form and marked the divisions of the Organs in accordance with my researches and varied experience.” L. N. Fowler. 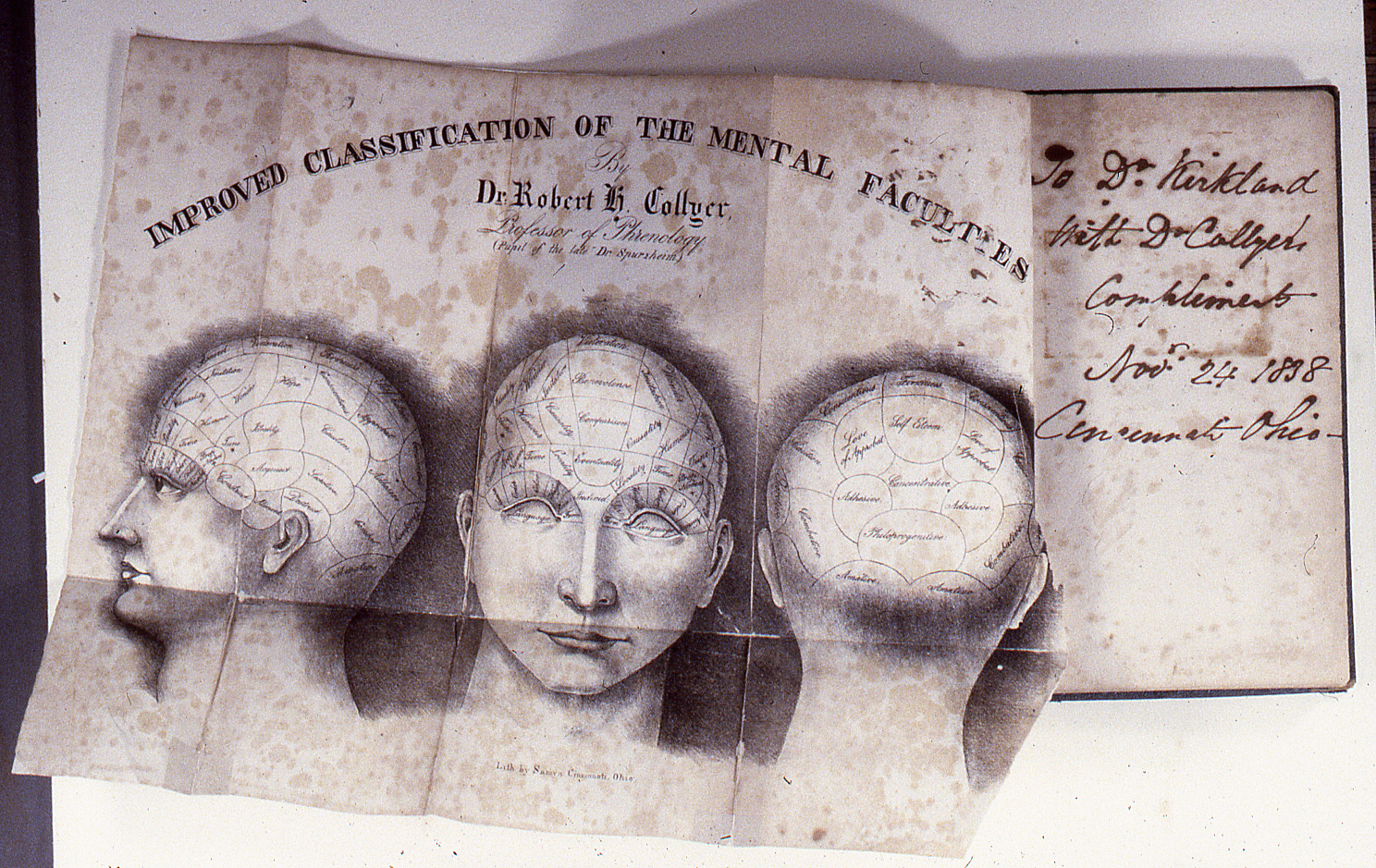 How right was the technique? Well, in Cleveland, Collyer did a reading for Jared Pottre Kirtland (a doctor). Collyer, an itinerant phrenologist in the late1830s, lectured in Cincinnati, where Kirtland was a professor at the Medical College of Ohio. Kirtland evidently attended a lecture by Collyer, followed by a private consultation. The results of this “reading” of Kirtland’s skull are found in a “Phrenologic analysis, showing a delineation of character,” pasted in the back of Collyer’s Manual of phrenology. In general, Kirtland felt that the reading gave accurate results, as indicated by his pencil notations throughout the book. For instance, Kirtland scored high on his ability to remember events (16+: “I recollect events that occurred at four years of age — every battle that Bonaparte fought after his Italian campaign”), but his retention of proper names was poor (6: “Remember the person but soon forget the name”). Of greater importance, Collyer rated Kirtland extremely high in his “love of approbation,” in his sense of “caution,” or carefulness, and in his degree of “conscientiousness.”

Phrenology was later labeled a “pseudoscience” and its practitioners were attacked as charlatans and fakes. Even so, phrenology helped to move psychological understanding forward in two important ways: 1. it suggested that different parts of the brain did different things and 2. It demonstrated that individual effort could be just as, if not more, important than biological inheritance. On one hand, such ideas had positive consequences: we have learned that different parts of the brain *do* have different tasks (though not the ones the phrenologists expected!) Separating ideas about nature and nurture as is pertained to education also had positive effects. However, phrenology, like physiognomy, frequently reinforced racial and gender stereotypes, privileging white men as superior.

How seriously did people take the “readings”? It has been compared to astrology–sometimes the pronouncements  made sense, sometimes they didn’t. Dr. Kirtland made notes in the margins of his copy of Collyer, suggesting that he, at least, wasn’t entirely sold on the idea!

[1] Collyer, Robert. Manual of phrenology, or, The physiology of the human brain : embracing a full description of the phrenological organs, their exact locations , and the peculiarities of character produced by their various degrees of development and combination. 1838.