Sixty-five years after he graduated from Adelbert College with a self-designed major in journalism, Phillip Ritzenberg (ADL ’53) remains thankful for the mentorship of two administrators who afforded him “life-altering opportunities.” 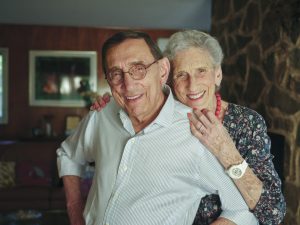 As a college student during the Korean War, Phillip was encouraged by Adelbert’s dean of men, Russell A. Griffin, to enter a naval officer training program. His involvement marked the beginning of a long affiliation with the U.S. Navy. Phillip served on the aircraft carrier Midway in the Far East, on the staff of the Atlantic fleet’s commander-in-chief and later in the Navy Air Reserve, retiring with the rank of commander in 1973.

Before he joined the service, however, Phillip spent a year abroad, immersing himself in Cold War Berlin and traveling extensively in Western Europe as a Fulbright Scholar. He owed this experience to the dean of the college, W. Powell Jones, who insisted that he apply for the scholarship and wrote to the Navy to request a delay in his active duty orders. “I learned later,” Phillip says, “that I was the first undergrad at Western Reserve to receive a Fulbright grant.”

Phillip went on to a 60-year career as a reporter, editor and publisher, but he is especially proud of his work as a design consultant to newspapers and magazines. “From 1993 to 2009,” he recalls, “I designed or re-designed some 60 publications in the U.S. and Canada, and conducted design seminars for press associations in both countries.”

Now, Phillip and his wife, Edna, have made a commitment in their will to endow a scholarship for CWRU undergraduates studying journalism or communication. A college scholarship recipient himself, he views the gift as a tribute to Deans Jones and Griffin, whom he remembers “with fondness and gratitude.”

Gifts made through wills by alumni and friends of the college are among the most critical sources of support for scholarships, professorships and capital projects. Three of the most practical avenues for making a bequest to CWRU are:

For assistance or sample bequest language to meet your goals, please contact Elizabeth Klein at 216.368.5764 or elizabeth.klein2@case.edu.