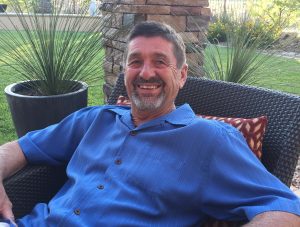 Victor Onufrieff, ADL ’67, and his wife Laurel had long thought about ways to support CWRU. Despite Victor’s fond memories of campus and desire to invest in the future of CWRU, the couple remained unsure about what kind of gift would make the greatest impact. Like most, the Onufrieffs hoped their donations would be more than a drop in the bucket. Their desire to give back lingered, re-awoken when their daughter Victoria, CAS ’17 enrolled in the College of Arts and Sciences.

It was at this time that Victor learned about the Maltz Performing Arts Center (MPAC) Phase I project.  Immediately, his enthusiasm was sparked. The Onufrieffs strongly believe in the value of a well-rounded liberal arts education, as evidenced by their daughter’s enrollment at the college, but, Victor and Laurel are especially supportive of the role that arts education plays in this degree, and more broadly, in modern civilized society. While the family practices these beliefs at home, where Victor plays the guitar and his two children are former students of the violin, the idea of supporting the arts on a wide scale resonated with the couple. MPAC Phase I was an ideal way to align the family’s love of arts education and musical performance with a cause that would make a broad impact at CWRU today and beyond.

Victor is proud of his family’s contribution to the Maltz Performing Arts Center. While visiting campus for Victoria’s graduation this Spring (and Victor’s 50th reunion!), Victor’s family was able to tour MPAC to view the renovations to Silver Hall. Victor was pleased to note that the quality of performance space was dramatically improved, and knows his family’s gift will make a long-lasting impact on campus by attracting higher caliber performing arts students to its programs, as well as students interested in extracurricular musical ensembles.

Do you have a passion that you’d like to support? Give us a call at 216-368-0096 to be connected to gift officer and learn about the possibilities.

Since the re-opening of this historic landmark with the Violins of Hope concert in 2015, 35,000 attendees, performers, and tours have passed through its bronze studded front doors. Art and technology have joined together at MPAC and as one donor put it, “(a merger that) significantly bumps up, by 2-3 levels, the University’s ability to attract higher caliber performing arts and technology students”.  MPAC has already provided rehearsal and performance space to more than 800 music students in just the first 18 months after opening. Student performances, usually free and open to the public, are quickly making MPAC a destination spot for community access to the sounds of classical, jazz, and gospel music.  Simultaneously MPAC has become a home for the exchange of thoughtful diverse ideas by housing both Think Forum and William M. Skirball Writers Center Stage  – bringing nationally renowned speakers like Dr. Henry Louis Gates, Jr. and authors like Alison Bechdel to Cleveland. And in case you missed it, MPAC served again as a critical university resource by hosting  2017 commencements for Mandel School of Applied Social Sciences and the Law School, and ceremonies for Nursing School Pinning and Undergraduate Studies Awards.