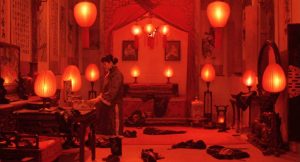 The Minor in Film

The English Major with a Concentration in Film

See what some undergraduates who studied film at CWRU have gone on to do.

Look for ENGL 367 in the Fall and Spring English Department course offerings and on SIS.

ENGL 368—TOPICS IN FILM. These films include:

ENGL 368—TOPICS IN FILM courses are open to all students, including first years, and have no prerequisites, including ENGL 367—INTRODUCTION TO FILM. There is no limit on the number of ENGL 368 credits a CWRU undergrad can earn.

OTHER FILM COURSES, including:

To see what film courses Case Western Reserve faculty might be offering in a current or upcoming semester, check out the English Department course descriptions and the online Student Information System (SIS).

English graduate students can write master’s theses and Ph.D. dissertations that focus on film or include it as part of their designated topic.