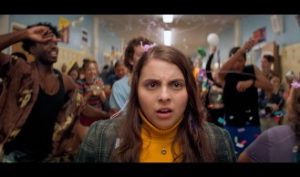 Do film courses have prerequisites?

ENGL 367—Intro Film has no prerequisites. Neither does ENGL 368—Topics in Film. Both Intro and the various Topics in Film courses welcome all students, including first years and students who have never taken a film course before.

Why should I take a film class?

Film courses offer a valuable opportunity to practice critical reading and writing skills, which will help you beyond film study and well beyond college. These are essential skills that will help you write, read, and think more precisely and effectively in your chosen career. That film is an engaging, stimulating, and “fun” topic makes its potential for this kind of learning and enrichment that much greater.

Second, these courses help you develop a critical eye—and distance—in a world increasingly inundated with screens. Seeing not just the overt message or story (“Buy this video game”; “They lived happily ever after”) but the underlying messages and stories will make you a more discerning person. These courses can help you better navigate a world of audiovisual texts, such as films, not only on the producers’ terms but also on your own.

Third, these courses (and the film minor and English major with a film concentration) can create a space in your undergraduate career where, in addition to working toward your major, and checking off your other requirements, you have fun (for no other reason than you want to) and possibly discover a new passion.

Is it hard to earn a minor in film or an English major with a film concentration?

No. The minor in film is just 15 credits—Intro Film and four other film courses of the student’s choosing. The English major with a film concentration involves just 9 credits of film study—Intro Film plus two of the many film courses on offer.

What are some film courses that have been taught in recent semesters?

Where can I learn more about Film Studies at CWRU?