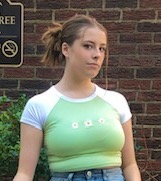 Q: Why did you choose this area of study?

A: I chose biology because I’ve been interested in genetics ever since learning about Punnett Squares in 8th grade. I always liked science, but genetics always stuck with me because it was like a puzzle. From there I became more interested in biology as a whole, but my passion for genetics has stayed the same. I decided to start learning German in high school because my older brother had already been learning German and we thought it would be fun to both speak a language that neither of our parents knew. From there, I realized I really enjoyed learning the language and I continued studying German in college. Transferring to CWRU made it so I could major in German, rather than just taking German classes for fun.

Q: What are you plans after graduation?

A: I’m pursuing my Master’s in Bioethics at CWRU!

Q: Why did you choose CWRU?

A: I originally was interested in CWRU for graduate school. I visited when I was considering transferring from my last university and I really enjoyed the tour. Also, CWRU made it possible for me to major in both biology and German while still graduating after 4 years.

Q: What is your favorite memory of CWRU?

A: The Halloween drag show last year was so much fun! There were so many people and the performers were all amazing.

A: Get involved on campus! Join clubs that interest you and if there isn’t a club for something you like, make one!