Alan Rocke, Distinguished University Professor and the Henry Eldridge Bourne Professor Emeritus in the Department of History, was named co-recipient of the Franklin-Lavoisier Prize. Co-sponsored by the Fondation de la Maison de la Chimie in Paris and the Science History Institute in Philadelphia, the award recognizes unusually meritorious efforts in the preservation or promotion of the entwined scientific heritage of France and the United States. 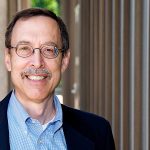 The French press release states that he was recognized “for his historical research work devoted to the development of chemistry in Europe in the 19th century, which led to the publication of many works of very great quality that are now benchmarks.”

Rocke is an historian of science who specializes in the history of the physical sciences, particularly in 19th- and 20th-century Germany, France and Great Britain. He has published dozens of articles and six books, including most recently Image and Reality: Kekulé, Kopp, and the Scientific Imagination.

Rocke joined the university in 1978 after completing his graduate studies at University of Wisconsin. Originally a chemist, Rocke discovered the history of science and “more or less fell in love with it,” he said.

“What I especially like about this field is that it bridges the so-called ‘two cultures:’ It investigates the essential character of science by examining its history, and likewise explores the enormous impact that scientific developments have had in the broad sweep of social, cultural, and intellectual history,” Rocke said.