Over the course of the last few months, Thrity Umrigar, Distinguished University Professor in the Department of English, has published two children’s picture books–Binny’s Diwali (Scholastic) and Sugar in Milk (Running Press)–both have received resoundingly positive reviews. Sugar in Milk, released in October 2020, was named one of Kirkus Best Books of 2020, a School Library Journal Best Books of 2020 and one of Amazon’s Best Books of the Month. 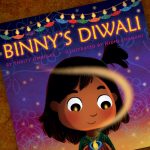 Inspired by her vivid memory of the emotions she had as a kid, Umrigar has always wanted to write for kids.

“I think of how books shaped me as a child and accompanied me into adulthood, the sense of relief one feels when you read something in a book that tells you [that] you were not the first person in the history of the world to feel that way or think that way. Books are a real gift and I wanted to pass that gift on to children,” Umrigar said.

In 2017, she released her first children’s book, When I Carried You in My Belly.

Umrigar revealed that Sugar in Milk may be the most personal of all the books she has written. In this story, she modernizes the legend of her Persian ancestors arriving in India, why they were allowed to stay and how they fulfilled the ancient promise of sweetening life where they went. As a young graduate student in America, this story served great cultural and personal importance and she used this story as a blueprint for how to conduct herself in her new country.

In addition to her books for children, Umrigar is the best-selling author of books for adults, including The Space Between Us, which won the Nieman Fellowship and earned a finalist spot for the PEN/Beyond Margins award.

To learn more about Umrigar, her approach to writing and her books, essays and articles, visit her website.