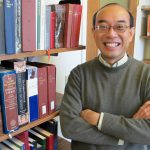 The SGR award will enable Tan, who is one of the leading scholars working on Asian American Christianity today, to work on a sequel that seeks to address key theoretical and methodological issues in contemporary Asian American Theologies that have been raised since the publication of his first book.

Funded by the Religion Division of the Lilly Endowment, Inc., the Louisville Institute awards grants and fellowships that seek to advance scholarship and research on North American religious institutions and practices, with the goal of strengthening church, academy and wider society. Congratulations, Professor Tan!