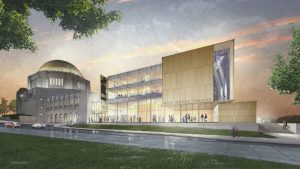 “Imagine the possibilities,” Roe Green told more than 130 people Thursday night at the Milton and Tamar Maltz Performing Arts Center. The occasion was the official launch of Phase II of the ambitious project to transform the historic synagogue into a state-of-the-art space for the university’s programs in music, theater and dance.

A quartet, a quintet and two duos took the stage in the legendary Silver Hall, the centerpiece of the project’s Phase I. They offered classical music, jazz and a one-act play that lecturer Greg Vovos penned for the occasion. It is Green’s $10 million gift that made the star of Phase II possible: A 250-seat proscenium theater will be the first ever in the university’s history.

Jean Kalberer, who, with her husband Walter, also contributed to the project’s second phase, provided a powerful illustration of just how long-awaited that performance space will be. A Flora Stone Mather alumna, she described a Friday night in October 1952 when she prepared to take the stage for the opening night of “I Remember Mama.” The location was Eldred Theater, a basement venue in a structure built in 1897 to be a YMCA.

All these years later, she noted, “students here are still having opening nights in Eldred.”

But not for too much longer. Occupancy is planned for winter 2021. In addition to the Roe Green theater, the project also features a black box theater with seating for 100, rehearsal studios, workshop space and faculty offices.

Last night’s ceremony also featured remarks from others involved in supporting Phase II, includig Ellen Mavec, university trustee and chair and president of the Kelvin Smith Foundation, and Karen Krause, on behalf of herself and her husband, Alan.

Milton Maltz—who, with his wife Tamar, represented the project’s first donors, and ultimately increased their commitment to a total of $30 million—took great joy in the moment, telling the crowd, “I can’t believe we’re finally here.”

There to see it all was Adele Silver, whose father-in-law, Rabbi Abba Hillel Silver, led the construction of the synagogue, completed in 1924, and whose husband, Rabbi Daniel Silver, succeeded his father in leading the congregation and also served as an adjunct professor of religion at Case Western Reserve for nearly two decades.

The event closed with a ceremonial groundbreaking featuring project donors, university leaders, and Jerrold Scott and David Rothenberg, the respective chairs of theater and music.