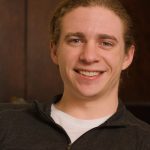 Joshua Holmes has been riding out the pandemic on his family’s cattle ranch in northern California. Holmes, a graduating physics major with a concentration in biophysics and a 4.0 GPA, has a to-do list that includes mending fences, feeding cattle and moving them from field to field.

While the prospect of joining the family business is appealing, Holmes plans to pursue a much different path as a medical researcher.

“Biophysics and its application to medicine is a relatively new field,” he said, “and I’m excited about joining it.”

Holmes has been exploring a career in medicine for years and plans to apply to medical school next year. He has volunteered more than 400 hours at an emergency room (ER) in California, where he assisted the ER director.

He credits his professors and CWRU’s small class sizes for preparing him for a successful future.

“All of my 200+ level physics courses were taught by exceptional professors,” he said. “Whether they were an experimentalist or theorist, researched solid state physics, particle astrophysics, or biophysics, each brought their own style to the classroom. I found this to be really valuable because there are often multiple approaches to a problem or concept, and it’s worth seeing as many as possible.”

His intellectual curiosity and versatility have earned him high praise from faculty.

“He is equally comfortable with theoretical calculations, programming numerical simulations and running experiments,” said Michael Hinczewski, assistant professor of physics and Holmes’ capstone adviser. “That degree of fluency and broad-minded approach to science is rare in general, much less someone at his early career stage.”

Holmes will spend the next year working as a research assistant in the Department of Physiology and Biophysics in the Case Western Reserve University School of Medicine while continuing ongoing projects in the physics department.