Picture for a moment the toxicologist, bending over his microscope to isolate and identify toxins–the biologist seeking new species in creek water–the geneticist parsing the double helix. Think of the physician, the scientist, even the micro-engineers. Now imagine those same specialists without one crucial piece of equipment: the microscope. Where would we be without this so-important “lens”?

The first “light microscope” owes its invention to Zacharias Jansen in the 1590’s, but interest in magnification began much earlier. The Romans explored the properties of glass and how, depending on curve and angle, it could make small objects appear larger. Later developments gave us the magnifying glass and even eye glasses (first made in the 13th century by Salvino D’Armate of Italy). The leap forward began with Jansen and his father, however, two Dutch eye-glass makers. Jansen’s device, which might remind us more of a telescope than a microscope, consisted of 3 sliding tubes fitted on either end with a glass lens. It magnifies 3x when the tubes were compressed, and 9x when fully extended to 18 inches. [1]

Isaac Beeckman provided the earliest known representation of a microscope (in print) in 1631, and members of the Accademia dei Lincei in Rome called it the “microscopium” as early as 1625. [2] Early models were not powerful enough to provide science with any considerable advantage. Anton van Leeuwenhoek (1632-1723), a Dutch cloth-merchant, made his own lenses, and his new lens tube had magnifying power of 270x. He later developed an instrument with a glass phial so that he could view blood circulation in the tail of a fish! [2] 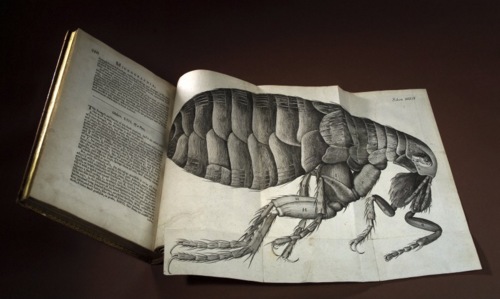 Nothing is so constant as change, and the microscope evolved from simple to compound; Robert Hooke’s Micrographia (1665) popularized their use. Hooke devised a side-pillar microscope on a solid base for use at a table, and John Marshall provided a stage plate in 1700. [2] Hooke looked at all sorts of objects, and what he saw opened new worlds of possibility. Snow crystals, the thin edge of a razor, or–and more dramatically–the flea. For the first time, a common household pest revealed itself an enormous creature with body hairs–all of which were rendered in detail at 18 inches across. He also pictures a louse, rendering it nearly two feet across when the image is unfolded. Imagine the impact of such a discovery–there were monsters in the house! [1]

Hooke described the flea as “adorn’d with a curiously polish’d suite of sable Armour, neatly jointed. . .” [3] But not everyone was impressed; some ridiculed Hooke for paying attention to “trifling” pursuits: “a Sot, that has spent 2000 £ in Microscopes, to find out the nature of Eels in Vinegar, Mites in Cheese, and the Blue of Plums which he has subtly found out to be living creatures.” [3] And yet, the book was a best seller in it’s day–and remains a curious volume even to the modern eye. Additional improvements, such as stabilizing distortion and aberration, made using the microscope possible 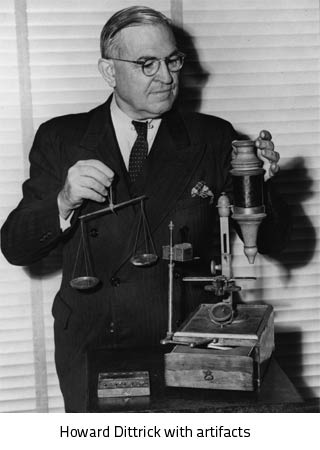 not only for the specialist but for the lay-person; by the 19th century, microscopes were used by science, medicine, and an interested public.

Today, the microscope continues to fascinate. What child hasn’t looked on in wonder at salt crystals? Or seen something as inconsequential as dust or a droplet of water come to stunning new life? Here at the Dittrick, the microscope appears center stage in hospital medicine and in forensics, and a history of the microscope (through its evolution) may be explored in the Millikin Room on the 2nd floor. Come see medical and scientific history through its most crucial lens!