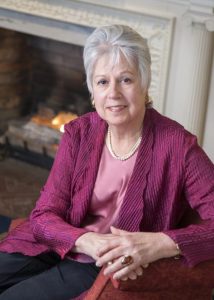 In designating Case Western Reserve as the recipient of a major gift, Thalia Dorwick has expressed her gratitude for the education she received here and provided support for the university’s internationalization efforts. Photo by Mike Sands.

In the fall of 1965, during her senior year as a Spanish major at Flora Stone Mather College, Thalia Dorwick (FSM ’66, GRS ’73) received an unexpected invitation. The chair of the Department of Romance Languages, Professor Lester Crocker, called her in and encouraged her to enter the doctoral program after she graduated. He offered her a teaching fellowship and the chance to pursue an academic career.

Until then, Dorwick had never thought of continuing her education beyond a bachelor’s degree. She was planning to teach high school Spanish. But when the department welcomed her to the community of scholars, she embraced the opportunity. “In all ways,” Dorwick says, “it was a life-changing situation.”

There was one other time, years afterward, when someone who recognized her talents propelled her in a new direction. In 1978, Dorwick was an assistant professor at California State University, Sacramento. She had won an award for excellence in teaching from the California Foreign Language Teachers Association. A publishing entrepreneur named Eirik Børve had given her a contract to write an introductory Spanish textbook with a prominent co-author. She was about to go up for tenure, and before long her application would be approved.

But then, Børve recruited her for other editorial projects, and soon he offered her a job. Like Dorwick, he was a scholar of languages. Norwegian by birth, Børve had come to the United States after earning a doctorate at the University of Bergen, and for several years he’d taught French at Grinnell College. In the early 1970s, however, he had left academia for publishing. Now he was inviting Dorwick to do the same.

She hedged her bets at first, merely taking a leave of absence from her faculty position. But once she became active in the textbook industry, she never looked back.

“It was a chance to influence language teaching on a national scale—something that I never would have been able to do on my own,” Dorwick says. “But more important, it gave me the chance to grow and continue learning about language instruction, and to interface with some of the best minds in language teaching. That, for me, was a very heady experience.”

Their firm, which worked initially for Random House, produced influential French, German, Italian and Spanish textbooks as well as programs to teach English to speakers of other languages. In 1988, publishing giant McGraw-Hill acquired this entire list when it bought Random House’s college division, and Børve retired two years later. But Dorwick went on to become McGraw-Hill’s sponsoring editor of modern languages—a category she expanded to include Russian and Japanese. Ultimately, she was named vice president and editor-in-chief of humanities, social sciences and languages.

She owed her professional life, Dorwick says, to the department where she became a scholar and teacher, and to Børve, who introduced her to publishing. Now, by designating Case Western Reserve as the recipient of a major endowment gift, she has given back to the university in a way that honors her mentor’s wishes and his memory.

“This gift represents an extraordinary commitment to furthering foreign language instruction at a major research university,” says Cyrus C. Taylor, dean of the College of Arts and Sciences. “What Thalia has done will have a transformative impact.”

Dorwick made the gift as the advisor to a trust that Børve established long before his death in 2012 to promote foreign language instruction in the United States. In choosing Case Western Reserve as the recipient, she was motivated not only by her ties to the university, but also by her wish to advance one of its strategic priorities—internationalization.

A CWRU trustee since 2003, Dorwick has seen the university establish a Center for International Affairs, expand its research collaborations around the world and recruit growing numbers of international students. During that time, she has taken a special interest in efforts to encourage undergraduates to participate in global learning activities. Now, Dorwick hopes that the Department of Modern Languages and Literatures—the main beneficiary of the gift—will help strengthen those efforts.

For example, with support from the Børve Fund, the department could develop informal language classes for undergraduates who have signed up for service projects or short-term study abroad programs. Imagine, Dorwick says, a group of students preparing for a three-week visit to China. Until the opportunity arose, they might never have thought of making such a trip or learning Chinese. But now, they would benefit from some exposure to Chinese language and culture.

“Just having that little bit of language makes the human contact abroad so much more wonderful and meaningful than it is if students have no language or no cultural preparation,” Dorwick says. “And maybe, if their lives take them on that path, they will learn Chinese later in life. I think that initiatives like this would allow language learning to be part of a liberal education in a way that it hasn’t always been.”

Dorwick notes that innovations in language instruction can also contribute to one of the department’s traditional missions—preparing undergraduates for in-depth study of foreign literatures and cultures. “That was the education I received, and it was wonderful,” she says. “The department has always excelled at educating students who take a variety of literature classes, who spend their junior year in Europe or Latin America. And of course, everyone wants that tradition to continue.”

Under the terms of the gift, the department and the College of Arts and Sciences will have considerable latitude in selecting projects to support foreign language teaching and global learning. The possibilities include building technology-enhanced classrooms, hiring adjunct faculty and awarding scholarships, especially to minority students and students with financial need. As a longtime university donor and trustee, Dorwick has been a consistent advocate for diversity and the expansion of opportunities for members of underrepresented groups. Her own will commitment to Case Western Reserve includes contributions to the Børve Fund to support minority scholarships.

In the process of creating the endowments, Dorwick says, she reflected on the changes she has seen in the university since her college days. “One makes a gift at a particular time,” she says, “and one makes that gift through the lens of what is possible at a given moment. If I had made this gift 20 years ago, I most likely would not have included the emphasis on internationalization, because that was not a priority of the university in the way that it is now.” She is pleased that she could support Case Western Reserve’s current aims while showing gratitude to the department that changed her life.