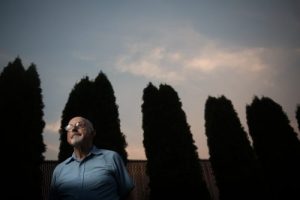 Among the opportunities available to astronomy students at Case Western Reserve, one of the most attractive is the chance to do research at Kitt Peak National Observatory near Tucson, Ariz. Since 1979, Kitt Peak has been the home of the university’s Burrell Schmidt telescope, a device powerful enough to explore faint star streams in the Virgo galaxy cluster, 50 million light years from Earth.

Walter Bonsack (CIT ’54) remembers that telescope from his college days. As a senior at Case Institute of Technology, he used it to collect data for his undergraduate thesis. Back then, however, the telescope wasn’t perched on a mountaintop in the southwestern United States. Instead, it occupied a domed brick building on Taylor Road in East Cleveland: the Warner and Swasey Observatory.

Bonsack’s early experience with the Burrell Schmidt laid the foundation for his future career. After earning a doctorate at Caltech, he joined the astronomy faculty at Ohio State in 1960. Six years later, he was invited to join a team of scientists developing the University of Hawaii’s Mauna Kea Observatories. By the time Bonsack retired in 1987, Mauna Kea was well on its way to becoming the world’s largest center for astronomical research. Today, it has 13 optical/infrared, submillimeter and radio telescopes stationed at an altitude of 14,000 feet.

Out of gratitude for the education he received at CIT, Bonsack began making gifts to the Case Alumni Association in the 1960s—“as soon as I had a steady income,” he recalls. In recent years, he has designated two departments in the College of Arts and Sciences—astronomy and physics—as the beneficiaries of his donations. He has also corresponded with Professor Chris Mihos, who served as chair of the astronomy department from 2009 until summer 2015. In one of their email exchanges, Bonsack wrote, “I want to congratulate you and your colleagues for the fine and important work you are doing at the front line of modern research.” 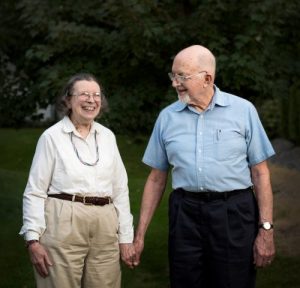 Sally and Walter Bonsack at their home in Spokane Valley, Wash. Aug. 17, 2015 for Case Western. (Photo by Rajah Bose)

Now, Bonsack and his wife, Sally, have made a will commitment to support physics and astronomy education at Case Western Reserve. Under the terms of their gift, the college may fund scholarships, support undergraduate and graduate research, purchase lab equipment or address other relevant needs.

“Dr. Bonsack’s story is a great reminder of the value of student research experiences,” says astronomy Professor and Chair Stacy McGaugh. “We are fortunate to have alumni as successful—and generous—as Dr. Bonsack, and are grateful for his commitment to help future generations of students share similar experiences.”

A Cleveland native, Bonsack was intrigued by science and technology from an early age. When he was accepted to CIT in 1950, however, he hadn’t yet settled on any particular field. His father, a metallurgical engineer, said to him, “Go study physics.”

During their first year, physics majors were required to take a general astronomy course taught by Professor Jason J. Nassau. “I had no previous exposure to the subject, and found it fascinating,” Bonsack recalls. The head of CIT’s astronomy program, Nassau had earned an international reputation for his discoveries concerning the distribution and brightness of stars in the Milky Way. He was also the founding director of the Warner and Swasey Observatory, which, through his efforts, had become one of the first research facilities in the country to acquire a Schmidt-type telescope.

By his sophomore year, Bonsack had landed a job at the observatory. He helped out during “public nights” for amateur stargazers—events that demonstrated Nassau’s commitment to educating the larger community about astronomy. Occasionally, he was allowed to assist with the telescope. He even moved into the observatory—the position provided him with a room along with a salary. “My work was apparently satisfactory,” he says, and he spent the next two summers as a full-time assistant. 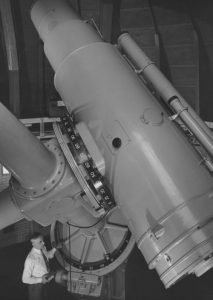 Professor Jason J. Nassau, founding director of the Warner and Swasey Observatory, led the effort to obtain a Schmidt-type telescope for the facility. Walter Bonsack took Nassau’s introductory astronomy course and worked as an undergraduate assistant at the observatory. Photo courtesy of CWRU Department of Astronomy.

Professor Jason J. Nassau, founding director of the Warner and Swasey Observatory, led the effort to obtain a Schmidt-type telescope for the facility. Walter Bonsack took Nassau’s introductory astronomy course and worked as an undergraduate assistant at the observatory. Photo courtesy of CWRU Department of Astronomy.

Majoring in astronomy wasn’t an option at CIT, but Bonsack didn’t mind. “I thoroughly enjoyed physics,” he explains, “and always saw astronomy as a way to apply physics to remote and mysterious objects.” For his senior project, he obtained approval to conduct research with the Burrell Schmidt. Bonsack analyzed light from early-type stars to gain clues to their chemical composition. He carried out the project under the guidance of Jürgen Stock, a postdoctoral fellow who had used a Schmidt telescope at Göttingen University in Germany. His leather-bound thesis, A Photoelectric Study of Stellar Spectra, still stands on a shelf in the astronomy department’s library, a testament to a long tradition of undergraduate research at Case Western Reserve and its predecessor institutions.

For a while after Bonsack graduated, the Warner and Swasey Observatory continued operating, as did similar facilities in other American cities. But as urban skies filled with light pollution, it became necessary to shift research telescopes to alternative sites. The Burrell Schmidt was reinstalled in Geauga County in 1957, at what became the Nassau Astronomical Observing Station, and ultimately at Kitt Peak. Over the decades, it has been upgraded several times; a wide-field digital camera and other modifications have made it one of the world’s premier telescopes studying diffuse starlight in galaxies.

Bonsack himself started working at mountaintop observatories—Palomar and Mount Wilson—as a doctoral student in southern California. Later, while at Ohio State, he did research at Lowell Observatory, 7,000 feet above sea level, in Flagstaff, Ariz. But these experiences didn’t fully prepare him for Mauna Kea. When the University of Hawaii started building observatories on the summit, there were concerns that the reduced oxygen levels at 14,000 feet would affect scientists’ ability to function. “The first time I went up there, I nearly passed out,” Bonsack says. “They had to help me down the mountain.” Before long, however, he and his colleagues became acclimated to the site. Today, astronomers mostly work on lower ground and operate the telescopes remotely.

His first assignment in Hawaii, Bonsack says, “was to design some of the instrumentation for the 2.2-meter telescope on Mauna Kea as well as to establish a teaching program at the university. It was a fun time.” Later, he devoted himself to observing stellar magnetism and other properties of early-type stars.

“Because the magnetic field of a star is generated in its interior, studying stellar magnetism helps astronomers work out the physical conditions inside a star,” Mihos explains. “One of Dr. Bonsack’s specialties was studying how the magnetic field changes over time. Sometimes these changes can be quite fast and abrupt, and are linked to things like how fast the star is rotating, how hot or cool it is and what its chemical composition is like. He was working on these questions throughout the 1960s, 1970s and 1980s, and these continue to be very important questions today.”

A Lot of Opportunity

More than six decades after completing his studies at CIT, Bonsack still feels lucky to have worked with outstanding teachers and mentors and to have embarked on his stellar investigations with an instrument as sophisticated as the Burrell Schmidt. But he has also been pleased to learn that, in some respects, his successors at CWRU have more choices than he did. Today, undergraduates can declare a major in astronomy. They are actively encouraged to pursue research, at Kitt Peak and elsewhere, and to present their findings at scientific conferences.

“That’s a lot of opportunity that simply wasn’t there when I was a student,” Bonsack says. As an alumnus and a donor, he adds, “I’m glad that’s being done.”

Article originally published in the Fall | Winter edition of art/sci Magazine in 2015.