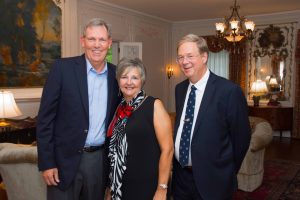 Dan Lease (ADL ’71) and his wife Jacqué (FSM ’71) are among the many generous donors who have set the college on course to achieve its Forward Thinking goal.

The couple, who met as undergraduates, recognize that gifts both large and small are essential to the college’s success. They’ve been making Annual Fund contributions for more than 30 years, and in 1998 significantly increased their yearly giving to make a profound difference in students’ lives through scholarships.

“I think it’s important that everyone go to college,” Dan says. “A public university education is good, but the experience is different at a private university. By underwriting some of the costs, we can offer that opportunity to a student who wouldn’t have thought about coming here.”

The Forward Thinking campaign prompted the Leases to consider an endowment gift that will yield resources for the college in perpetuity.

“I thought, ‘I would just as soon make a larger gift,’ and we decided $150,000 would guarantee the university a substantial yearly sum,” Dan says. “If things go well, we can add to it. But for now, it’s a start.”

After attending the October campaign launch, Dan was inspired to encourage other friends to contribute as best they can.

“People see gifts of that size and say, ‘What can I do?’” he says. “But it’s important that people try to give at any level. If someone only can give $500, enough of those add up—together, you can endow a chair.”

Article originally featured in the Fall | Winter issue of art/sci magazine in 2011.