The sun rises at the South Pole for the first time in six months.

The challenges of keeping COVID-19 off the continent of Antarctica have lengthened the stay of CWRU Department of Physics fourth-year PhD student Allen Foster, currently at the Amundsen-Scott South Pole Station for what was originally a 10-month research assignment.

Allen’s work for the South Pole Telescope (SPT) was featured by The Daily last spring. We reached out for an update on his homecoming. Here’s what he shared: 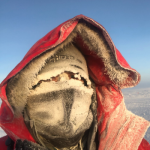 Allen Foster wears mask and tape to protect his face from frostbite at the South Pole.

“COVID has indeed complicated things more so than a usual year. Obviously the United States wants to keep COVID off of the continent of Antarctica so they are providing a lot of effort in quarantining and have made special arrangements for summer deployments at McMurdo [the largest Antarctic station] and South Pole. For starters, we will not have summer-only people coming to the Pole this year. Only next year’s winter crew will be coming in, which means that we (the current winter crew) have to train them on winter-over duties. This is typically done by

a team of SPT people who come down for the summer specifically to train and maintain the telescope.

“Another challenge with this is that the United States Antarctic Program is severely restricting the incoming flights both onto the continent and to the Pole. There are no LC-130 cargo planes this year, only smaller passenger DC-10 Baslers. This complicates the transport of personnel as well as cargo (incoming food, outgoing hard drives of data, for example).

“In the end this means that I will be staying a few extra weeks (in a best case scenario where next year’s winter-overs arrive in time). … I’m not too excited to get back home just to sit inside [for quarantine]—not only is COVID dangerous, but my immune system is weakened from 11 months of isolation with the same 41 other people—but I am excited to be able to go outside without fear of getting frostbite in under five minutes.

“Even though it will be winter in Cleveland, it will be more than 100 degrees warmer than it has been for the past several months here! I’m excited to go for runs, bike rides and walks and just breathe fresh air that doesn’t burn my lungs!”

You can learn about Foster’s South Pole adventure on his blog and follow the South Pole Telescope on Twitter.