Joy K. Ward, dean of the College of Arts and Sciences and professor of biology, is an internationally recognized academic leader and scientist. She has a depth of experience that spans local, national and international levels. Dean Ward received her BS degree in biology from Penn State University and earned her doctorate at Duke University. She also held a post-doctoral position at the University of Utah. She was an award-winning professor and Wohlgemuth Faculty Scholar at the University of Kansas where she resided for 17 years prior to becoming dean at Case Western Reserve. 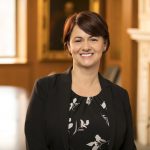 Since arriving at Case Western Reserve, Dean Ward was named a Fellow of the American Association for the Advancement of Science (AAAS) in 2021 and has recently edited the book,  Photosynthesis, Respiration, and Climate Change (Springer Nature). She was also the recipient of a Presidential Early Career Award for Scientists and Engineers (PECASE) from the White House in 2009 and a CAREER award from the National Science Foundation. The Kavli Foundation and National Academy of Sciences also named her a Kavli Fellow, an honor reserved for the nation’s most promising early-career scientists and engineers. She was also selected by the National Academy of Sciences to serve as U.S. chair and planning member for the Frontiers of Science in Saudi Arabia, Japan, Oman, Kuwait and has been a scientific delegate to Uzbekistan through the State Department.

Ward has mentored many successful students at the undergraduate, graduate and post-doctoral levels, and many of these students have published peer-reviewed papers with her that have increased our understanding of climate change effects on plants. Ward has also been a mentor for several NIH-sponsored programs to enhance diversity and inclusivity in STEM fields.