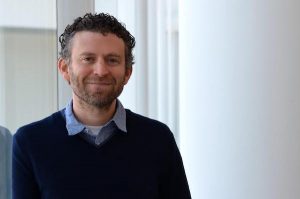 Daniel Goldmark, associate dean for Interdisciplinary Initiatives & International Affairs and professor in the Department of Music, started at Case Western Reserve University (CWRU) in 2005—a time when the department’s graduate program in musicology was quite small. Goldmark saw an opportunity to take advantage of the resources available right in the university’s backyard, throughout University Circle and Cleveland, to build the graduate program and enhance undergraduates’ experiences.

Now, 16 years later, the musicology program is nationally recognized, graduate student enrollment has increased tremendously and the department has collaborations across the city.

“To see that happen over my course of time here has been really gratifying,” Goldmark said.

With a passion for music and history that dates to his youth and a family full of teachers, becoming a professor was a natural path for Goldmark. But finding his expertise in American popular music, film and cartoon music and the history of the industry was spurred from an interest he uncovered as an undergraduate student.

“I realized I had picked up a lot of my musical knowledge from films, especially cartoons,” he shared.

After this revelation, Goldmark spent time digging for more historical information and research about the intersection of cartoons and music, but he couldn’t find much. So, in tandem with his love for history, he decided to dedicate his undergraduate and graduate studies to dive further into this topic.

A few years later, as Goldmark was pursuing his graduate degree and ready to explore film and cartoon music professionally, the subfields of film music and popular music studies were “starting to explode” nationally, which he considers “fortuitous”. Now, he is able to give people the tools they need to better understand how their tastes and knowledge of all things—music or other kinds of cultures—come to them through media.

With his years of experience at CWRU, teaching students in courses that relate to many topics in music and continuously dedicating time to research and scholarship endeavours, Goldmark now joins the Office of the Dean as Associate Dean for Interdisciplinary Initiatives & International Affairs. As Associate Dean he will work closely with interdisciplinary centers and programs, facilitate partnerships and agreements with other University Circle and Cleveland institutions, foster global partnerships, both current and new international programs and courses, and grow our interdisciplinary research and scholarly portfolio.

“I think I mainly look forward to connecting people,” Goldmark said about the new role.

Goldmark held similar roles on a local and national level and is ready to start fostering interdisciplinary collaboration and partnerships across the College and the university to help concepts and ideas to grow.

“So much good work, so much more innovation can happen when we work with other people,” he said.

Get to know Daniel Goldmark better with these questions.

What is your favorite part about CWRU/Cleveland?
What I really like about Cleveland is the history. There is a real wealth of stories. I’ve spent the last 15 years collecting music about, and created in, Cleveland and northeast Ohio. It’s become a subset of my research and I keep finding more and more.

We also have the pretty big city/small town effect where everyone does know everyone else, or you can get to everyone within maybe one or two degrees, which I think for my job is going to be incredibly helpful.

What do you do in your free time?
We have a new puppy, Darby. She is a golden doodle, and just seven months old, so we’re spending a lot of time training her. I also enjoy being with my kids, cooking, biking, running and cycling. Just making time for yourself and family is important.

The last book you read?
Go Ahead in the Rain: Notes to A Tribe Called Quest by Hanif Abdurraqib. I’m also in the process of reading about six other books. There are also several books—not including the Harry Potter series, which I re-read regularly—that I keep in a rotation. I come back to Travels with Charley by John Steinbeck most regularly.

Are you a morning person or a night person?
Both. I get up early and I go to bed late. I’m usually the first one awake and the last to go to bed. Saturday mornings I’m one of the first customers to arrive at the North Union Farmers Market at Shaker Square.