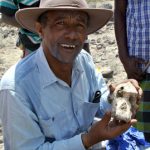 Yohannes Haile-Selassie “shook up the human family tree with the discovery of a remarkably preserved 3.8-million-year-old skull.

Yohannes Haile-Selassie is one of “10 People Who Mattered in Science” in 2019, according to the scientific publication Nature. Haile-Selassie is curator and head of Physical Anthropology at the Cleveland Museum of Natural History and adjunct professor in the Department of Anthropology at Case Western Reserve. The article recognizes his groundbreaking work in human origins.

From the article: “Haile-Selassie is considered one of the field’s most talented fossil finders. Many treasures have surfaced from his project in Woranso-Mille, a region scattered with hominin fossils from the Pliocene, a key period in the evolution of the genus Homo and its close relative Australopithecus between 5.3 million and 2.6 million years ago. He is also one of a crop of Ethiopian palaeoanthropologists who lead major scientific projects in their homeland — a big shift from a generation ago, when foreigners oversaw most of the research in this fossil-rich nation.”