Each year, the College of Arts and Sciences honors alumni who have made exceptional contributions to their fields and to the lives of others.

Distinguished Undergraduate Alumna of the Year 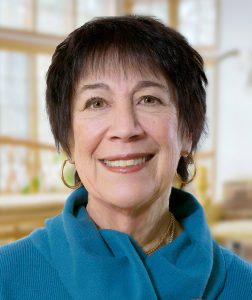 Karen Youdelman (FSM ’65) has devoted her career to special education and support of the hearing impaired, with a focus on teaching speech to children with profound hearing loss.

After graduating from Flora Stone Mather College, where she majored in communication sciences, Youdelman earned a master’s degree in education of the deaf and hard of hearing at Columbia University. She then spent two years as a Peace Corps volunteer in Brazil, teaching deaf students and adults and training aspiring teachers at speech clinics and schools. Eventually, she returned to Columbia to obtain two additional degrees: an EdM in special education instructional practice and an EdD in special education administration/supervision.

In addition to working directly with children, Youdelman has contributed to her field as a researcher, an educational consultant and a university instructor in deaf education and speech-language pathology programs.

Among her leadership positions, Youdelman was elected to a two-year term as president of the Alexander Graham Bell Association for the Deaf and Hard of Hearing (AG Bell) in Washington, D.C. She is a former board member for AG Bell and Cleveland Hearing and Speech Center, and she has served on the College of Arts and Sciences Visiting Committee.

She and her husband, Robert Youdelman (ADL ’63), now live in Richmond, Mass., where she mentors students at Berkshire Community College and volunteers in the state’s Special Education Surrogate Parent Program.

Distinguished Graduate Alumnus of the Year 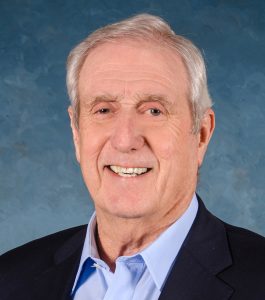 Antony E. Champ (GRS ’63) earned his doctorate in chemistry from Case Institute of Technology and immediately entered the chemical industry as a scientist at Celanese Corporation, then one of the country’s major producers of polyester fiber.

After rising through a series of research positions, Champ became involved in other aspects of Celanese’s operations. He managed two production plants and was eventually named vice president of manufacturing. He ventured into textile fibers marketing and the commercialization of new technology. Then, in 1987, Champ became president and CEO of Fiber Industries, an independent company that he and other investors had formed through a leveraged buyout of Celanese’s synthetic fiber operations. Two years later, after the firm was sold to Wellman Industries, Champ retired. But he quickly found a new outlet for his entrepreneurial energies.

Today, Champ and his wife, Edie, are the proprietors of White Hall Vineyards, a working winery in Virginia’s Blue Ridge Mountains. They started out in 1992 with six acres; today, they have more than 48 acres under cultivation. In a 2008 art/sci interview, Champ mentioned that although he relied on a professional winemaker’s expertise, he liked to keep up with the latest in viticultural research. “It keeps the winemaker from snowing me,” he explained with a smile. “I can outdazzle him with chemistry.”

An emeritus trustee of Case Western Reserve University, Champ established a graduate fellowship fund in 2008 in memory of Professor J. Reid Shelton, his doctoral advisor and a leading rubber chemistry researcher. “He was a consultant for industry, so I think he taught me some practical aspects of business,” Champ recalled. “He knew what industry looks for—results.”

Distinguished Young Alumna of the Year 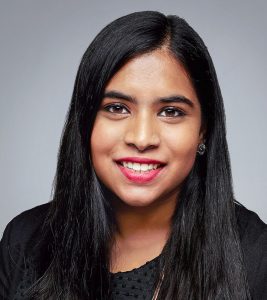 Aishwarya Arjunan (CWR ’10) worked in a genetics lab at the CWRU School of Medicine while pursuing a bachelor of science degree in biology. She went on to earn a master of science in genetic counseling, a master of public health in human genetics and a certificate in global health at the University of Pittsburgh Graduate School of Public Health.

Early in her career, Arjunan provided genetic counseling to couples and families while engaging in research and education about genetic diseases. After completing an internship at Children’s Hospital of Pittsburgh, she relocated to Chicago, where she divided her time between the Norton and Elaine Sarnoff Center for Jewish Genetics and the Ann and Robert H. Lurie Children’s Hospital.

Today, Arjunan is a clinical product specialist at Myriad Women’s Health, where she manages all clinical aspects (including research, marketing and results reporting) of a genetic test called Foresight Carrier Screen. The test helps identify couples at elevated risk of passing serious inherited conditions to their children.

A past president of the Illinois Society of Genetic Professionals, Arjunan received the 2018 New Leader Award from the National Society of Genetic Counselors and went on to co-chair the organization’s Diversity and Inclusion Task Force. She is a core faculty member in the Northwestern University Genetic Counseling Program, where she serves on the admissions committee and as a thesis advisor.

Ever since she graduated from CWRU, Arjunan has been an Alumni Admission Ambassador, assisting the university in its outreach to prospective students. She also belongs to the Alumni Association’s board of directors and chairs its governance committee.

For the first time, the Distinguished Service Award highlights the collective achievements of college alumni from a single class.

Members of the Class of 1970 attended the university during a time of political and social upheaval, and at a formative period in the history of Case Western Reserve. Many of them participated in the antiwar and civil rights movements. They were among the founders of campus organizations that endure to this day, including the Undergraduate Student Government and The Observer. After they graduated, they went out into the world as some of the university’s most civically engaged alumni.

Through public service, advocacy and activism, members of the Class of 1970 have advanced a variety of causes, from combating domestic violence in the United States to improving conditions for textile workers around the globe. At the same time, they have been exceptionally generous in their service and support for Case Western Reserve. Fifty years after their
graduation, the college honors them for all they have done and continue to do to shape the university, their communities and their society.